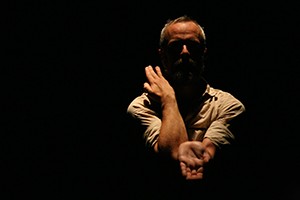 The Manuel García Room of Teatro de la Maestranza host the next days 7 Y 8 of November, to 19,00 hours, a sample of Dance Month in its 21st edition.

The French choreographer and dancer Karine Ponties, company director Lady of Pic, attends the Maestranza with two of the five dance solos that make up the cycle “Scarecrows” (Scarecrow): Babil with interpretation and texts by Eric domeneghetty Y Benedict Pacific with the collaboration as interpreter of the Andalusian dancer Guillermo Weickert.

A scarecrow is, for the choreographer herself, "An exciting and contradictory figure, a lonely soldier of fear but who has never scared anyone ”and that is why he has chosen it as the center of his dance cycle
.
The cycle “Scarecrows” It is composed of five independent but related pieces: Babil, Fidèle à l´éclair and Havran are three dance solos whose characters appear together in a fourth creation, Vertebral humus. Later, Karine Ponties added a fifth just to finish setting up the cycle, Benedict Pacific.

Dance Month, International Exhibition of Contemporary Dance, is a private initiative event organized by Transforma Producción Cultural that began to be held in Seville in 1994 with the aim of publicizing and promoting the creators of dance made in Andalusia.

Director of Dame de Pic, choreographer and interpreter, Karine Ponties is the author of more than 30 works that have toured much of the world in the most prominent performing arts events. The universe of his creations is characterized by his sense of the absurd, your exploration of intimacy, organic and human relationships.

Karine Ponties was born in France in 1967. His immersion in dance begins at the school of Juan Tena and Ramón Soler in Barcelona and continues in Mudra, Maurice Béjart's school in Brussels.

As an interpreter he has worked with many companies including, Frédéric Flamand, Michele Noiret, Nicole Mossoux / Patrick Bonté y Pierre Droulers, before creating his own company Dame de Pic in 1995. In 1996, the company presents its first piece Low level and shortly after, Karine Ponties is awarded in the 4th edition of "European Pépinières for young artists".

He has recently been one of the seven European choreographers selected to participate in the European dance project in Russia, Intradance (2010). In this frame, the play Mirliflor has received the Golden Mask 2011 (Russian National Theater Award) for the best contemporary dance show.

Your awarded collaborations, between them, with visual artist Thierry Van Hasselt for the work Brutalis Y Holeulone highlight the interdisciplinary aspect of the company.