Moses P. Sánchez premieres his new project in his first concert as resident artist of the CNDM 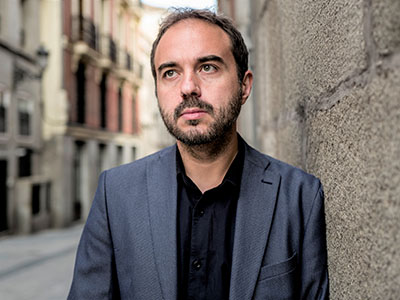 Moses P. Sánchez (Madrid, 1979), spearhead of our current most international jazz, will launch his new project Dedication II at first concert as resident artist of the National Dissemination Center Musical (CNDM) in season 22-23. this composer, productor musical, pianist, improvisor and arranger will star in various musical events throughout the new edition of the CNDM. This first concert will take place on Saturday 26 of November, to 20:00 hours, in the Chamber Hall of the National Music Auditorium, within the framework of the Jazzmadrid International Festival 2022.

Considered one of the main figures of the Spanish and European music scene, Moses P. Sánchez has his own musical language, with a rich combination of diverse influences that makes their compositions transcend boundaries between genres. This multidisciplinary character, his ability to surprise thanks to the infinity of resources that dot his works, and his solid career are some of the reasons why the CNDM chose the musician as resident artist of the new edition; a sample of the entity for going further, since this residence has been occupied, traditionally, by artists specializing in classical music.

Dedication II part of a previous project, Dedication (Universal/Magna 2010), that the pianist recorded in New York with the performers Toño Miguel (double bass), Borja Barrueta (drums), Y Javier Vercher (tenor sax), three prestigious national jazz talents who have been able to amplify the sound complexity of the pianist. In this new album, Moisés surrounds himself again with this fabulous cast, in the form of an unbeatable quartet, to release a download of the best jazz, with pieces loaded with freshness and vitality. It is a work where the pianist and composer from Madrid offers works traversed by a very particular emotion and that include masterful improvisations. The recording and publication of this new project will take place in 2023.

Through the CNDM Circuits, that start from the commitment of the institution to structure musical proposals throughout the country, Moses P. Sánchez will also be present with this project in Oviedo Jazz (20 from January) Y Salamanca Jazz (21 from January). further, within the framework of the artistic residency of the CNDM, the public will be able to enjoy the absolute premiere of a new commission from the CNDM: the first joint work by our resident artist and fellow pianist Marco Mezquida. The Madrid musician will also perform his project Bach (Re) Inventions at the Early Music Festival of Úbeda and Baeza (3 from December), Commissioned by the Juan March Foundation in 2018, published in 2021, and with which he has been awarded the MIN prize 2022 for best jazz album.

Since in 2014 published Soliloquy, his first solo album, Moses P. Sánchez has been giving shape to that own language that makes its way, since jazz, towards other territories such as symphonic rock, classical music or flamenco. Thanks to your powerful instrumental mastery and the fascinating vitality that fill his works, This artist has received important awards both in Spain and in countries like the United States; among them the Latin Grammy nomination for his album Unbalanced: concerto for ensemble.

Throughout his more than 20 year career, Moses P. Sánchez has appeared in programs as outstanding as the FIAS (Madrid), jazzmadrid, the Stresa Festival of Italy, the Vitoria-Gasteiz Jazz Festival or the Santander International Festival, among many. With his discography he traces a path of permanent exploration through a symphonic conception of his creations that has become the key to his musical identity.. This is manifested with the same force in his adaptation projects of great authors such as J.S.. Bach, Beethoven, Stravinsky about Bartók, in which he pours his very personal vision of some of his most admired composers.