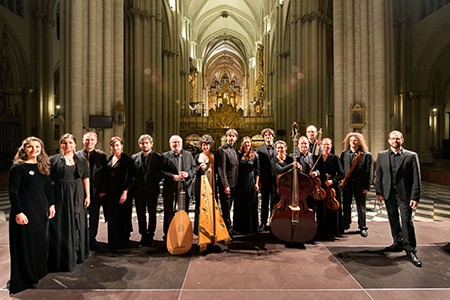 The festival begins Thursday 9 April with Mother of God. Medieval music and liturgy, a concert of the Capella de Ministrers group in which the public will make a musical trip to the Middle Ages Spanish thanks to a collection of the most significant works of this period: from the hymnal of the Poor Clares of Valencia (Joy virginal flower) to the Song of the Sibyl (liturgical drama of Gregorian melody), passing the compositions of the Red Book of Montserrat Monastery.

Since its inception in 1987, Chapel of the group Ministrers, under the direction of Carles Magraner, It has developed an important task and musicological research in favor of the Spanish musical heritage, from the Middle Ages until the nineteenth century. The result perfectly combines historical accuracy, the musical sensitivity and, especially, an irrepressible desire to communicate and engage these experiences to the viewer. Training activity has been intense since its inception; have toured the best venues and music festivals both inside and outside Spain. This course of study and restoration of ancient music has been reflected in the more than 55 discs recorded for EGT, blue, Auvidis and CDM (Capella exclusive record label of Ministrers). They have received rave reviews from the press, as well as numerous awards and honors as the award for Best Production Label of the Ministry of Culture, Important Prize Editorial Prensa Valenciana or the International Classical Music Award 2018 (ICMA) in the category of Early Music.
He 10 April is the turn of Concerto 1700 which will play, with soprano Aurora Peña, He died for sin: sung sacred Spanish. Touch training issues Giovanni Bononcini, José de Nebra, Arcangelo Corelli, José de Torres Y Vicente Basset, among which Baroque compositions as aria with violins Volad, sighs the Nebra, sonata for violin and continuous Corelli or He died for sin, Sung the Blessed also with violins- José de Torres. Sung were a kind of religious music that had an oral part intended to be sung by worshipers.

Founded in 2015 by violinist Daniel Pinteño, Concerto 1700 It born with the intention of interpreting works ranging from the earliest stage of the Baroque to the first glimmerings of Romanticism. Despite his young age, the group has earned a place in the major national routes thanks to his virtuosity and timbral fantasy that critics have praised on several occasions. Highlights its recovery work forgotten musical heritage, especially composers and chapel masters of the eighteenth century Spanish. They have been awarded the Prix Circuit FestClásica 2017 in the "Early Music" and have acted successfully in the most important festivals nationwide. In 2020, After success with their first album José de Torres (ca.1670-1738): loving Lord with soprano Aurora Peña, released their second album Italy in Spain: Violin Sonatas in late 18th-century Madrid It is including works for violin by the end of the eighteenth century preserved in the National Library of Spain.
Easter Festival closes on 11 April with Music for Lent La Grande Chapelle, a concert of sacred polyphonic music in which works of Cristobal Morales interpreted (1500-1553), one of the main representatives of the Spanish Renaissance polyphony composition. The work of the Sevillian composer -pickup in more than seventy printed before 1600- It was not only an essential part of the repertoire of the most important churches and cathedrals in Spain and Latin until the end of the Modern Age, but it enjoyed an extraordinary prestige among theorists and historians. While in Spain only it had short stays in cathedrals and chapels, His name is associated with the decade remained in the papal chapel Paul III, since 1535 until 1545. In Rome, he carried out his work with colleagues singing the likes of Costanzo Festa, Jacques Arcadelt or Juan Escribano. Morales was particularly interested in the texts of Lent, including the celebration of Ash Wednesday and Sunday Septuagesima, Fiftieth and Sixtieth. In this concert, La Grande Chapelle pays tribute from its wide range of motets for Easter.

With a European vocation, La Grande Chapelle is a vocal and instrumental early music ensemble whose main objective is to make a new reading of the great Spanish vocal works of the sixteenth and eighteenth centuries, paying particular attention to the production of the Baroque policoral. At the same time, It aims to contribute to the urgent recovery efforts Hispanic musical repertoire. Founded in 2005, The group has performed in major cycles of Spain and major international festivals. He has also created his own label, Praise, with which publishes maintained high musical recordings and musicological interest. For its artistic quality and solvency, discs La Grande Chapelle / Lauda have won awards and national and international prestigious awards in the world of early music, such as two Orphées d’Or (Lyrical Disc Academy of Paris, in 2007 Y 2009), Seal of the year Prelude Classical Music Awards 2007 (Holland), 4 stars of the BBC Magazine, etc. In 2010 I received the Award FestClásica (Spanish Association of Classical Music Festivals) for his contribution to Spanish interpretation and retrieval of unreleased music.