My Opera Player grows in content, subscribers and cultural dissemination 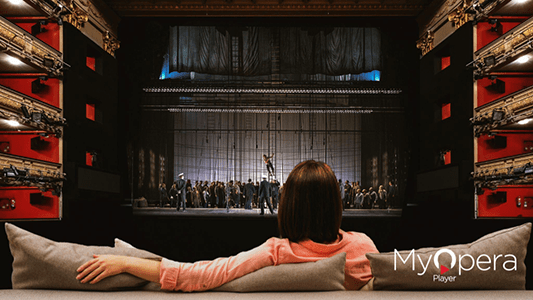 In November 2019 the video platform of the Teatro Real was born, My Opera Player, with the vocation of becoming a theater of theaters in which lovers of Opera, the dance and the music could access as many titles as possible, both own production and other important national and international institutions.

When exactly three years have passed since its launch, the project, in which theaters from more than 150 countries is already consolidated, has diversified content, has received the support of the public and the recognition of the Observatory of Culture of the Contemporary Foundation -which has awarded it the Award for the Best Digital Initiative of the Performing Arts in 2020 Y 2021– and that of the Opera XXI Awards, which granted him the Best Digital Initiative 2020.

Currently, My Opera Player offers a catalog consisting of 226 Titles, coming from more than 50 theaters and dance companies around the world (see list at the end of the note), of which 116 they are operas, 29 dance, 67 concerts and 14 flamenco shows, selected with a quality criterion that chooses productions headed by the best stage directors, the most acclaimed voices, renowned conductors and emblematic choreographies of the repertoire and newly created. further, My Opera Player is the only platform specialized in performing arts that has all its content subtitled in Spanish, besides english, highly valued tool at the national level and a fundamental bridge for Spanish-speaking countries.

To make the content of the platform more attractive and accessible, the titles have been grouped according to different criteria and subscriber demand in different collections: Baroque, Classicism, Romance, Verismo and 20th century, opera in spanish, Women at the Opera – stage directors, costume designers, conductors and great singers-, Of whom -productions directed by filmmakers or based on Oscar-winning films, Books and Scripts -based on emblematic literary works-, Opera and Fashion -wardrobe designed by costume designers linked to the world of fashion-, Power and Politics – operas inspired by power struggles and historical conflicts- Y Historical archive of the Royal Theater, that tries to recover the audiovisual heritage of the institution since its reopening in 1997. Both the number of collections, as that of productions that integrate them, will be increased successively with the aim of expanding and satisfying the demand of more and new audiences.

Framed in the policy of promotion and defense of the flamenco which is being carried out by the Teatro Real, My Opera Player has incorporated into its cultural offer a careful selection of shows of this universal art in all its disciplines. With a firm commitment to bring together great figures, both established artists and young promises, The collection includes Real Flamenco shows and others from flamenco temples such as the Cante de las Minas Festival or the Granada Music and Dance Festival.

One of the great bets of My Opera Player is being the broadcast live shows – 9 operas from the Teatro Real in the last year and three scheduled for the current season: La Sonnambula, Achilles in Skyros Y Turandot– in order to make the platform a lively and dynamic meeting point that brings together music lovers from all over the world and is not just a cultural container. A) Yes, Productions from other international venues will soon be offered live.

He young audience has a special place in the Teatro Real and its audiovisual platform expands this relationship through special projects in collaboration with Universities, like the UNED; exclusive discounts and dissemination of content from the Reina Sofía School of Music, where the musicians of the future offer their first performances.

With about 90.000 registered users who can access the content in open, a select catalog on the rise and a synergy of forces that transcends borders, My Opera Player has become the main international platform for classical music on stage and one of the pillars of the Teatro Real.

THEATERS AND COMPANIES PRESENT IN MY OPERA PLAYER