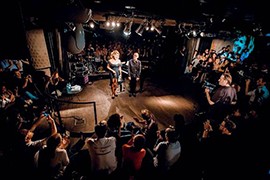 Mezzo-soprano Nancy Fabiola Herrera returns this season to perform in New York, which will offer a recital at the Cervantes Institute in Manhattan next 18 October to celebrate the 80th anniversary of the composer Antón García Abril. In the program, a monograph dedicated to the work for voice and piano of this outstanding composer Aragonese. Canary interpreter, last year she played Maddalena in Rigoletto at the Metropolitan Opera House New York, This action returns to the city in which it was formed and grew as an artist, adding to the cycle of concerts in homage to García Abril last July began with an evening by the mezzosoprano María José Montiel in Santiago de Compostela and will soon have other great artists, as soprano Maria Bayo Navarre or the Irish mezzo-soprano Zandra McMaster.
Nancy Fabiola Herrera, commencing the course inaugurating the academic year at the Conservatory of Music of the Canary Islands with the conference Beyond the classroom: tools to confront the artistic reality (the next 30 September at 20h. Gran Canaria at the headquarters of this university), It will move after, the days 7 Y 8 October, a la Kammerphilharmonie Bremen de (Germany) to interpret El amor brujo, Manuel de Falla, and songs by Xavier Montsalvatge. Later he will travel to the Cervantes Institute in New York and the Teatro de La Maestranza in Seville to offer two separate recitals with piano Ruben Fernandez Aguirre, all before embarking on their Australian adventure: at the Sydney Opera House will offer eight performances of its legendary Carmen, Bizet, capital which comes after this character fall in love with New York audiences, London, Tokyo and Berlin, among other cities.