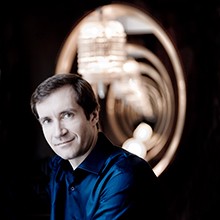 Next Tuesday 19 masterclass will take place the Russian pianist Nikolai Lugansky with students Royal Conservatory of Music and the next day, 20 October, will offer his recital in cycle Great Performers of Scherzo to 19:30 hours in the National Music Auditorium.
According to 'The Guardian’ Lugansky is “a mixture of lyricism, brilliance and good sense of boldness”. Nikolai Lugansky has emerged as a pianist of extraordinary intensity and versatility. Demonstrates sensitivity and refinement playing Mozart already Schumann, while boasts an impressive virtuosity Rachmaninov Y Prokofiev.

It appears regularly in some of the most prestigious festivals in the world, including the London BBC Proms, La Roque d’Anthéron, Verbier, and the Edinburgh International Festival. He has performed with the New York Philharmonic, the Orchestre de Paris, Bamberg Symphony, London Symphony Orchestra and St. Petersburg, among many. In the chamber music format, stands out as usual accompanist Vadim Repin Y Leonidas Kavakos. His albums have achieved the Echo Classic Award, as well as the Diapason D'or and Exceptional Scherzo.

He has served previously on three occasions in the Great Performers Cycle, for editions 2003, 2004 Y 2013.
For many, it comes more and better pianist who has grown in recent years. Its powerful virtuosity and programs represent a coherent sum of rediscoveries and new repertoire.