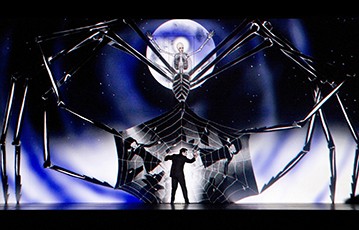 He Teatro Real has presented this week the new season 15-16. A balanced season in terms of repertoire titles and those most unknown. Makes a clear commitment to co-productions with other theater rather than own. Which contributes to meeting the objective of adjusting the budget to the maximum. Increased number of representations. the elimination of the management fee to purchase tickets via the Internet. The programing, structured by operatic titles, articulates different conceptual and thematic lines with varied interdisciplinary proposals. Five new productions will be offered, four guest productions, three operas in concert version and two chamber operas. The structural lines of the programming are maintained in the next season, with the extension of the VOCES DEL REAL and SESIONES GOLFAS cycles, and the creation of the cycle DANCING ON THE VOLCANO. The Royal Theater joins the Commemoration of the IV Centenary of the death of Miguel de Cervantes and William Shakespeare. The link with cultural and artistic institutions is strengthened, with multiple and attractive activities. And the subscription modalities are expanded (16 total), its sale is anticipated and expedited and the procedures for changing dates are made more flexible.

In the 19th season of the Teatro Real since its reopening, in 1997, five new operatic productions will be presented - all in co-production with major theaters, four guest productions, three operas in concert version and two chamber operas to be offered at the Teatros del Canal. The program is completed with three dance shows and sixteen concerts integrated into the Voces del Real cycles, Golf sessions and the newly created Dancing on the Volcano.

Noteworthy is the premiere in Madrid of the staged version of Moisés y Aarón, from Arnold Schoenberg, undoubtedly one of the outstanding works of the lyrical repertoire of the 20th century, which will arrive in a co-production between the Royal Theater and the Paris Opera, with stage direction Romeo Castellucci —One of today's brightest creators who will debut in Madrid. Closely in tune with the plot and historical circumstances of this opera, The Emperor of Atlantis will also be released, from Viktor Ullmann, disciple of Schönberg and one of the great composers of the time, whose career was cut short by the rise of Nazism. The opera was composed in the Terezín concentration camp. Both works outline a thematic axis that will extend to shows of the Pedagogical Program, like the little youth opera Brundibár, from Hans Krasa, also premiered in Terezin. In the same conceptual framework, but with another atmosphere, four concerts will be offered at the Sony Auditorium of the Albéniz Foundation (one of them staged) within the cycle Dancing on the volcano, which include references to the Jewish cabaret that had such an influence on Schönberg, Kurt Weill and other contemporary composers.

New for the season include the premieres of Alcina - one of the best operas in Händel's extensive catalog, stage direction of David Alden- Y, especially, The Liebesverbot, from Richard Wagner, unfairly relegated youth work, that the Royal Theater and the Royal Opera House will rescue from oblivion with the complicity of Kasper Holten, head of stage direction, e Ivor Bolton, musical director of the Royal Theater. Wagner's opera is based on Measure for Measure, from William Shakespeare, of whom the fourth centenary of his death is commemorated. Within the framework of this event, the play Two Shakespearean Delusions has been programmed at the Teatros del Canal, from Alfredo Aracil.

The Royal Theater has also joined the Commemoration of the IV Centenary of the death of Miguel de Cervantes programming The altarpiece of Maese Pedro, from Manuel de Falla, and the knight of the sad figure, from Tomás Marco.

In addition to the prohibition of loving, that Wagner considered a "sin of youth", the season includes the composer's last opera, Parsifal, who will conduct musically Semyon Bychkov and that will mean Claus Guth's debut for Real, another of the most sought-after names in the current stage direction.
Mariella Devia, Gregory customer, Mariusz Kwiecien Y Silvia Tro Santafe will make up the stellar quartet that will star in the return of Roberto Devereux, from Gaetano Donizetti, that will inaugurate the lyrical season on 22 of September. Another crucial title of romantic belcantism, I Puritani, from Vincenzo Bellini, will bring together some of the best singers in this repertoire: Diana Damrau, Javier Camarena Y Ludovic Tezier, directed by Evelino pido, in the pit, Y Emilio Sagi, In the scene.
Also Rigoletto, from Giuseppe Verdi, with musical direction Nicola Luisotti and scenic David McVicar, will unite such renowned singers as olga Peretyatko, Lisette Oropesa, Stephen Costello O Leo Nucci, which will also star in Giuseppe Verdi's Luisa Miller, in concert, under the direction of James Conlon.
PLacido Domingo will perform together with Ainhoa ​​Arteta Y Michael Fabiano, I due Foscari, de Giuseppe Verdi, under the baton of Pablo Heras-Casado, Principal Guest Director of the Teatro Real. Also in concert version will be presented Written on Skin, that the composer himself will direct, George Benjamin.

Among the most popular titles in the lyrical repertoire, the return of The Magic Flute also stands out, with musical direction by Mozart expert Ivor Bolton, with masterful staging of Barrie Kosky, which will debut at the Teatro Real. The Pedagogical Program will include, at the same time, The Magic Flute, a magnificent introduction to the opera by Mozart for children, and a teen version of Dido and Aeneas, from Henry Purcell, with address Rafael Villalobos.
In the concert and recital program there are names of both prestige and Measha Brueggergosman, Natalie Dessay, Angela Denoke, Renée Fleming, Karina Gauvin, Venera Gimadieva, Barbara Hannigan, Anja Matches, Susan Graham, Juan Diego Florez, Francesco Meli, Bejun Mehta, Andreas Scholl, Simon Keenlyside, Christopher Maltman, Peter Mattei Y Franz Josef Selig, among others.

Three dance companies will meet in the season: Nacho Duato will present his version of Sleeping Beauty with the Berlin Staatsballett, and a triple program with choreographies by him and by Marco Goecke. Sasha Waltz will bring, together with your company, the acclaimed version of The Rite of Spring, from Igor Stravinsky. Finally, José Carlos Martínez will propose a tribute to Enrique Granados with the National Dance Company ending in July of next year, the 19th season of the new Teatro Real.