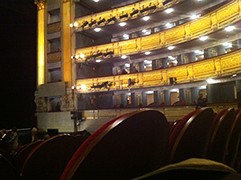 He Teatro Real starts today its campaign for the sale of opera tickets for the season 2014/2015, the first designed by the new artistic director, Joan Matabosch, linking artistic proposals and the big names in the world of opera, the will to integrate the activity of the Royal Theater in the most important cultural centers of the city.

They are made available to the public 11 fertilizer types opera, from the generals, with 10 Y 8 Titles, from 80 euros, to the so-called reduced, with four opera titles each, since 40 euros, They cover a broad proposal with which the new season of the Teatro Real proposes a broad journey through four centuries of opera history. In it there will be reunions with emblematic titles such as La traviata, de Giuseppe Verdi, of works less frequent on Spanish stages such as La hija del regimiento by Gaetano Donizetti, and premieres of operas from a lesser-known repertoire in Spain, in the case of Hänsel und Gretel, The Engelbert Humperdinck.

Two world premieres, The public, of Sotelo/Lorca, and the city of lies, by Mendoza/Onetti; the representation, first in Madrid, of Death in Venice, Benjamin Britten's last opera, and the recovery of the Spanish lyrical heritage implied by the staging of Goyescas, Enrique Granados, These are just a few brief notes of a season that includes names like Plácido Domingo, Natalie Dessay, Roberto Alagna, Philippe Jaroussky, Woody Allen or La Fura dels Baus.

He 29 dance tickets will go on sale from April, that can be purchased from 33 euros, composed by Víctor Ullate Ballet, Hamburg Ballet, y el Nederlands Dans Theater, three companies that have managed to collect the heritage of tradition to project it in a modern and current language.

From 10 From June, other modalities will be available, such as Popular subscriptions, which this year include a degree in dance and two in opera; Real Voices, newly created this season, composed of concerts starring the most demanded names of the moment; and the Family subscription for the little ones, made up of shows from the Pedagogical Program aimed at creating and consolidating new audiences and the public of the future.

The Youth season ticket, discounted from 80% on the usual price of zones A and B, and the newly created Joven Plus, intended for fans between 30 Y 35 years, discounted from 60% in the same areas as above, will go on sale on 2 of September. In both categories, the Teatro Real Youth Card will be delivered free of charge at the time of purchase of the season ticket..

To become the holder of a ticket for the Teatro Real, you can use the usual sales channels: box office, over the phone 902 244 848 and on the website by request in the link www.teatro-real.com/es/temporada-2014-2015/abonos.