OCNE: Curses the baroque to the romantic classics 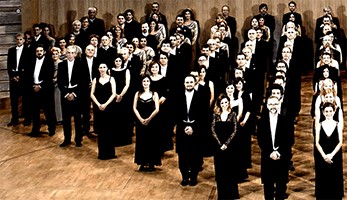 The National Orchestra and Choir of Spain will travel, in this month of november, from the Baroque Curses to the Romantic Classics, without forgetting the epic breath in the Symphonic concerts of the month, together with the two Satellites concerts -in the Chamber room- and the first Discover… it's from the season 2015/16 with the Tri-Cornered Hat Failure.

CONCERTS OF THE NATIONAL ORCHESTRA AND CHORUS

Baroque curses, with the address of William Christie

Jean-Philippe Rameu, the Boréades (The descendants of Boreas), suite

The malditismo continues its journey with an evening dedicated to the best French Baroque and classicism, all timbral splendor and sonic refinement, from the hand of one of its main specialists, William Christie.

Expressiveness, rigor and clarity are the distinctive features of this director, harpsichordist and musicologist who has led the historicist movement from its origins. Born in the United States, Christie has developed most of her activity researching and recovering small jewels from the French musical repertoire and she is largely responsible for the fact that today many fans know Marc-Antoine Charpentier and Jean-Philippe Rameau.

This time, we are offered two very representative exponents of the style: excerpts from Medea and a suite from Les Boréades, to which destiny, its difficulty, the political intrigues and subversive elements of the libretto played a trick.

Epic breath, with the address of Susanna Mälkki

The presentation of the Finnish director Susanna Mälkki and the North American violinist Leila Josefowicz together with the National Orchestra of Spain is one of the events that will mark this season. Not in vain the baton of Mälkki has a considerable international projection associated precisely with the name of Thomas Adès. Great connoisseur of his works, Mälkki brings to Madrid one of the most praised scores of the English composer and for this he will have the collaboration of another great champion of contemporary music: Leila Josefowicz.

The interpreter, deserving of prestigious awards and possessing an enviable career despite her youth, will expose the many beauties of the Adès concert using his violin from the Gesù de 1724. Before, We will have the opportunity to appreciate Sibelius's ability to create a sonic universe that is as evocative as it is original in The Oceánides and Symphony No.. 5 Prokofiev, which also possesses an undoubted epic breath.

Romantic classics, under the direction of David Afkham

The joint participation of the German violinist Veronika Eberle and the German-Canadian cellist Johannes Moser in the famous Brahms Double Concerto in A minor has all the traces of turning this date into a night to remember, such is the enormous talent of these two young artists: their names appear in any list that includes the most outstanding musicians on the current scene.

As if this were not enough, this incentive, the program includes two milestones in the history of dance in the 20th century: Romeo and Juliet is, probably, one of Sergei Prokofiev's most accomplished pages, who wastes here a melodic invention as rich as Tchaikovsky's. The three-cornered hat brings together the most characteristic features of Manuel de Falla, a master in the art of stylizing folk music, that in this way enters the concert hall through the front door.

The ticket price includes the previous talk by Luis Ángel de Benito and a drink at the end of the concert. This concert is linked to the Pintasonic workshop. The meeting point for the activity is the foyer of the Symphonic Hall at 11:45 h. A Discover ticket gives the option of a place in Pintasonic® which is a creative children's workshop of 1 hour duration, in which the little ones (3 a 8 years) develop their creativity and sensitivity while you attend one of the Discover concerts…

Solo trombones per ONE TROMBONE CHOIR 2i2 QUARTET

Emilio Cebrián, One night in Granada

Voracious time by the National Choir of Spain