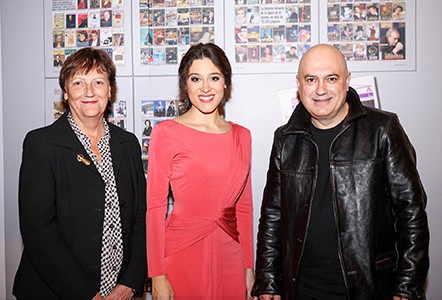 CURRENT OPERA has delivered today its Awards 2019, the awards given since 2002 the only magazine in the lyrical genre that is published in Spain and one of the most important in the world. The winners are:

AN ARTIST AWARD FOR YOUR INTERNATIONAL CAREER

-Made in the act in the Circle of the Liceo de Barcelona- Seville soprano Leonor Bonilla He offered a recital accompanied by the teacher Carlos Aragon, while the general director of the Liceu Conservatori explained details of his doctoral thesis on the origin of both the governing body as the Gran Teatre Liceu of the. They presented the awards Without Fernando River, president of this publication has been published since 1991; Pablo Meléndez-Haddad, chief editor of the magazine; Y Albert Garriga, OPERA ACTUAL correspondent in Zurich.

They attended the personalities quote from the business world and culture as Oriol Aguilà, President of the Association Opera XXI, which brings together the coliseums and festivals programming lyrical Spain and director of the Festival Castell de Peralada; Xavier Cester, Director of the Department of Music of the Catalan Institute of Cultural Industries (ICEC) and collaborator of ÓPERA CURRENT; senior leadership of the opera houses Barcelona (Gran Teatre del Liceu: Salvador Alemany, Valenti Oviedo, Victor Garcia de Gomar, Leticia Martin), Sabadell (Association of Friends of the Opera Sabadell: Mirna Lacambra) and Sevilla (Teatro La Maestranza: Javier Menendez); President of the Festival Castell de Peralada, Matthew Isabel Suqué; the president of the Circle of the Lyceum, Francisco Gaudier and members of the host entity as José García-Reyes, Luis Lopez de Lamadrid Y Manuel Bertrand; the presidente of the Society of Gran Teatre del Liceu, Xavier Coll; presidente of Friends of the Liceu, Ramon Bassas; President of the Foundation Ferrer-Salat Music, Sergio Ferrer-Salat; Vice President of the Foundation Damm, Ramon Agenjo; President of the Association of the Paseo de Gracia Without Luis; the director of the OperaStudio of the University of Alcalá, Lourdes Perez-Sierra; and artists such as stage director Paco Azorín or actress Roser Road, In addition to the patrons of OPERA ACTUAL Awards 2019.