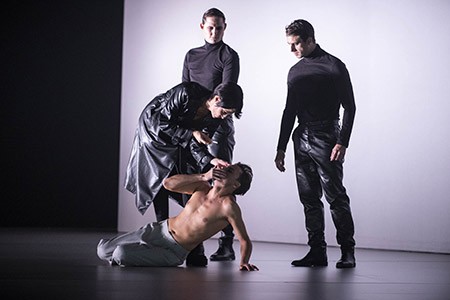 Between 21 and the 25 of September, he Teatro Real Y Theaters Canal will offer the premiere in Spain of the opera Orpheus, from Philip Glass, new co-production between both theaters, which will be the starting point of the Season 2022/2023 del Real and can be seen in the Red Room of Canal at 20.30 hours (Sunday 25 to 19.30 hours).

Released in 1993 en el American Repertory Theater de Cambridge, Massachusetts, based on the film of the same name by Jean Cocteau (1950) and inspired by the myth of Orpheus, will be musically directed by George French in front of the Principal Orchestra of the Royal Theater and two mostly Spanish voice casts, with stage direction and costumes by Rafael R. Villalobos.

The baritones will alternate in the interpretation of the different roles. Edward Nelson Y Alexander Sanchez, like Orpheus; las sopranos Sylvia Schwartz Y Natalia Labourdette, in his day protagonist of one of the most memorable recordings of the work; las sopranos Maria Rey-Joly e Isabella Gaudí, in the role of the princess; tenors Mikeldi Atxalandabaso is Igor Peral, Heurtebise; tenors Pablo Garcia-Lopez Y Emmanuel Faraldo, like Cégeste, the reporter and Glazier; mezzosoprano Karina Demurova, Aglaonice; the short ones Cristian Diaz, the poet, Y David Sanchez, Judge.

Behind Jean Cocteau's film trilogy and the operatic triad dedicated to him by Philip Glass –Orpheus, The beauty and the Beast Y The Terrible Children-, there is a heartbreaking past shared by both creators. Death haunted Cocteau's life since childhood. The suicide of his father when he was only nine years old, the premature departure of her lover -the young poet Raymond Radiguet at the age of twenty-, or the abortion of his son with the actress and model Natalie Paley, caused by opiate use, are events that influenced Cocteau's orphic work, whose representation explores "the successive deaths that a poet must go through before transforming into himself".

Four decades after the release of this legendary film, the death of multimedia artist Candy Jernigan, companion of Philip Glass, prompted the American composer to undertake this double homage, appropriating and transliterating the cinematographic pieces in three profound operas that reflect on death and the transformation of the individual.

Orpheus is a parable of the life of a poet obsessed with himself and with immortality. In the company of Heurtebise and a mysterious princess, the characters transit between the world of the living and the dead through communicating mirrors, inhabiting an unknown and intermediate realm between both dimensions. “I give you the secret of secrets: mirrors are the doors through which death comes and goes. Look at yourself all your life in a mirror and you will see death toiling like bees in a transparent hive..

The stage manager Rafael Villalobos distances itself from Cocteau's film and fully focuses on Philip Glass's score to bring this performance to life. The production takes the story to the frenetic New York of the years 90, when the expansion of television in the United States occurs and capitalism begins to openly affect art. The appearance of a hundred channels created a parallel dimension “on the other side of the screen”, a kind of mirror in which reality is not only reflected but also distorted.

The production reflects on the two deaths of the artist, the earthly and the artistic, marked by a search for ephemeral and illusory fame that prevents him from transcending. A) Yes, Orfeo, despite being married to Euridice, falls in love with the enigmatic princess -an envoy of death-, whom he pursues while traveling between two worlds in which time becomes liquid and confuses the real with the unreal, life with dreams.

The staging of Villalobos, who also signs the costumes of the characters, takes place in an abstract scenic space in which the characters no longer observe themselves through mirrors but through screens. The scene design is Emanuele Sly; the lighting, from Irene Cantero and video design, from Cachito Valdes. The Sevillian director has also had the participation of Javier Perez in the direction of scenic movement.

Philip Glass evokes these two dimensions creating an atmosphere between gloomy and hectic with mysterious melodies, demanding vocal lines and cyclical instrumental patterns that highlight that racket between life and death.

The musical director George French describe Orpheus as a minimalist score in your code, but deeply rhetorical and demanding for the soloists and the orchestra. This will be the third title of the director from Alicante against the Head of the Royal Theatre Orchestra, after his debut with Brundibar, in 2016, and the world premiere of Transit, Chamber opera with music and libretto by Jesús Torres, commissioned by the Teatro Real in 2021, both with a magnificent reception and great recognition of their work.

With functions Orpheus, ehe Royal Theater joins the commemoration of the centenary of the birth of Mary Casares, the legendary Galician actress who starred in Jean Cocteau's film trilogy, and who, exiled in France, it became the favorite of great cinematographic names such as Robert Bresson, Marcel Carné and Cocteau himself, in addition to first figure of the Comédie Française and the National Popular Theater.

AROUND THE PROGRAMMING OF ORPHEUS

or productions of The Metropolitan Opera: Akhnaten Y Satyagraha

O Einstein on the Beach