Otello starts the season of the Teatro Real 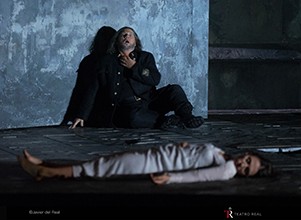 The next 15 September the Teatro Real opens the season 2016-2017 with a new production Otello, from Giuseppe Verdi (1813-1901), coproduction with English National Opera -where premiered, with excellent reception, in September 2014 and Royal Opera in Stockholm, who presented the opera in March 2015.

As you can be seen in the exhibition The birth of 'Otello' by Verdi: una mirada to the Historical Archive Memories, this masterpiece was born thanks to the skill and perseverance of the great editor Giulio Ricordi (1840-1912), that over several years was persuading Verdi, and discreetly retired, to resume operatic creation, who had left after the premiere of Aida in Cairo, in 1871.

Giuseppe Verdi was then a composer himself internationally, with a long and fruitful career, good economic position, very popular and loved by their active involvement in social and political life hectic Italian. He decided, well, not to compose operas, giving way to a new generation of composers who tried to renew the canons of Italian opera, when the powerful influence of Wagner He permeated the musical life of his country.

But the sweeping dramatic force William Shakespeare (1564-1616) Verdi woke from their slumber and, with the incentive of librettos excellent composer and poet Arrigo Boito (1842-1918), composed, and septuagenarian, his two latest and greatest operas: Otello y Falstaff. With the first, He undertook the deepest renewal of its language, with a kind of synthesis and quintessence of Italian opera, that would mark the end of a cycle of almost two centuries; with the second, comic opera led to the summit of refinement and subtlety, saying goodbye with a delicious and nostalgic loa youth and love.

Driven by the conciseness of the libretto by Boito, simplifying the Shakespearean plot delving into the complexity of the characters and their relationships, Verdi uses all his creative resources at the service of dramaturgy, creating a seamless score, in which they melt and dissolve arias, duos, recitativos y ariosos, in a continuum in which the tension never decays, even in the most intimate moments and lyricism.

A great orchestration outlines the characters and illuminates the evolution of drama, with a density and containment hard to beat, in which the song flows like a declamation, Interlocking subtle melodies, epigramáticas cases, huge dramatic force, with other long expressive breath.

With this work, so powerful dramaturgically, American scene director David Alden He has chosen to emphasize the internal conflict of Otello, whose warlike character masks the enormous insecurity that makes the wicked machinations of Iago vulnerable. A ruined city and gloomy Mediterranean conceived by scenographer Jon Morrell It accentuates the terrifying atmosphere of the Shakespearean drama that Verdi waxed and universalized.

Renato Palumbo, that Real has directed Les Huguenots, Tosca and La traviata, verdiano returns with another title, again with the Albanian soprano Jaho Ermonela, who triumphed with his rendition of La traviata, in 2014. She will be accompanied by tenor Gregory customer, one of the most celebrated interpreters of the demanding role of Otello today, which also he opened last season with his acclaimed Real Robert Devereux, and star in the Standard will be offered in October and November. With them, incarnating the sibilant sadist and Iago, will be the baritone George Petean, who just participated in the opera I Puritani that ended last season.

The chorus Little Singers of the Community of Madrid, directed by Ana González, and the Titular Choir of the Teatro Real, prepared, as usual, by its chief conductor, Andrés Máspero, will act again by the Head of the Royal Theatre Orchestra, under the baton of Renato Palumbo.