Paavo Järvi and the Kammerphilharmonie Bremen 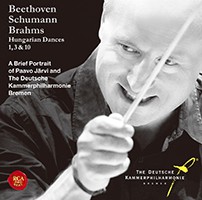 Paavo Järvi and the Bremen Chamber Philharmonic are re-associated in honor of Brahms, Beethoven Y Shumann, coinciding with its appearance in Mecklenburg-Western Pomerania Festival Y Rheingau Music Festival, performing Brahms symphonies and concertos. Three new recordings by the German romantic composer and pianist are on the CD, to be combined with highlights from his renowned Beethoven and Schumann cycles.

Järvi and the Philharmonic's performances of Beethoven have been acclaimed around the world as a new international reference.. Both through performances such as a Symphony Cycle and individual performances in all the great music capitals of the world, They are concerts that have received the most favorable reviews and fantastic ovations from the public.

Together they have recorded nine symphonies between 2004 Y 2008 on five albums released by RCA Red Seal, and in 2009, his Symphony Cycle at the Bonn Beethoven festival was filmed and broadcast around the world, to be later released via Sony Classical. Together they also then embarked on the Schumann Cycle, also with a video of the performance and documentary for Deutschewelle / Unitel to great critical acclaim.

This new album includes future, present and past of your collaboration: future and present are represented by three Hungarian Dances (No 1, 3 Y 10) orchestrated by Brahms. They will be part of their Brahms project and perform them on their ongoing tour. These are the only pieces orchestrated by Brahms from the 24 existing, and they are full of energy, joy, charm and exotic flavor. They are some of Paavo Järvi's favorite pieces.

Other pieces are the highlights of his acclaimed recordings for RCA Red Seal., personally chosen by the Tallinn manager himself, Estonia. The Bremen Chamber Philharmonic shows high doses of virtuosity, intensity, excitement and energy.

Grammy winner Paavo Järvi is now in his fifth season as musical director of the Paris Orchestra. After his highly successful residency at the Vienna Musikverein in May 2014, this season it continues to appear in the main capitals of Europe and Asia. In season 2012/13 He was appointed Commander of the Order of Arts and Letters by the French Ministry of Culture, due to his contribution to music in that country.

The Bremen Chamber Philharmonic is one of the world's leading orchestras, delighting audiences in all countries with his unique musical style.