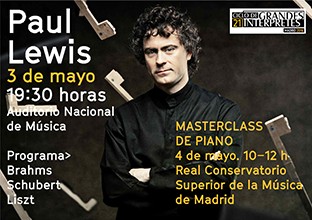 british pianist Paul Lewis (Liverpool, 1972) will perform next Tuesday 3 of May, to 19:30 hours in the National Auditorium within the 21st season of Scherzo's Great Interpreters Cycle. Lewis, one of the most internationally renowned pianists, will address Brahms, Schubert Y Liszt. Likewise, will give a lecture on Wednesday 4 May at 10:00 hours in the Royal Conservatory of Music (Street Doctor Mata, 2), directed to the students of the center, but open to all public interested in the subject.

Lewis is an old acquaintance of the musical cycles of the Scherzo Foundation, since he participated in the first edition of the Young Interpreters Cycle, in 2002, with a program that he defined as ironic and funny. Repeated three more times, already inside the Great Interpreters, in 2006, 2008 Y 2011. Paul Lewis is considered one of the most important pianists of his generation.. His interpretations of the work of Beethoven Y Schubert have been enthusiastically received by audiences and critics around the world. Today he is one of the most serious pianists, conscious and balanced that exist in the circuit, as well as a generational reference in relation to the romantic composers. His poetic conception of music is one of the most outstanding characteristics in his performances.

He was born into a working class family with no connection to music. He started out playing the cello, since his school could only provide classes for that instrument, until the 10 years he finally opted for the piano. The talented performer studied with Richard Bakst en Chetham’s School of Music, and Manchester; and with Joan Havill en la Guildhall School of Music and Drama, before going on to train privately with Alfred Brendel. with his wife, Norwegian cellist Bjørg, Lewis, is artistic director of Midsummer's Music, a chamber music festival held annually in Buckinghamshire, United Kingdom.

He frequently performs as a soloist with the most important orchestras in the world.. He is a regular guest at the most prestigious international festivals (Lucerne, Salzburg, Tanglewood); and has passed through stages such as Carnegie Hall, the Champs Elysées Theater or the Royal Festival Hall. In 2010, he was the first pianist to tackle a complete cycle with all five Beethoven piano concertos, in a single season of the BBC Proms, one of the biggest festivals in the world. A year later, embarked on the Schubert and the Piano project: 1822-1828, in which he performed the mature works of the composer. With this project, Lewis toured the London stages, NY, Chicago, Tokyo, Rotterdam, Florence, Schwarzenberg y Madrid.

Throughout his career, Lewis has been awarded numerous prizes such as the Royal Philharmonic Society's Instrumentalist of the Year.; of the Edison Awards; three Gramophone Awards; and the Diapason D'or, among others. In 2009 he was invested with an Honorary Doctorate by the University of Southampton. With the harmonia mundi label, he has tackled works by Mussorgsky and Schumann, the complete Beethoven sonatas and concertos and all major piano works by Schubert. His latest album appeared on harmonia mundi in April 2016 is Brahms Piano Concerto No1 with the Swedish Radio Symphony Orchestra, directed by Daniel Harding.

Lewis's will be the third performance of the 21st season of the Great Interpreters Cycle of the Scherzo Foundation, inaugurated last February by Ivo Pogorelich. In addition to the Croatian interpreter, The renowned pianist Arcadi Volodos has also passed through the stage of the National Auditorium. The program includes the 21st season 11 recitals, as well as three master classes taught by Volodos, Lewis and Fellner.

PROGRAM 3 MAYO
At 19:30 hours at the National Music Auditorium