“Lost in Bosco”, a dream of puppets and medieval music at the Teatro de la Zarzuela 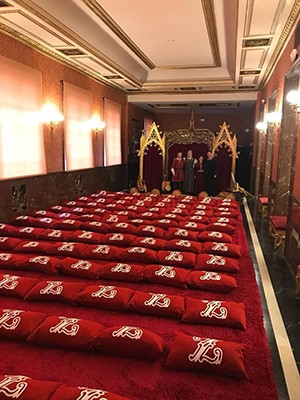 They will 12 functions -ten school and two open- of the 14 al 20 from January in Ambigú Coliseum.

He show, for spectators from 6 years, is a coproduction between the theater and Spanish-Canadian company Claroscvro, and it is signed by Julie Vachon Y Francisco de Paula Sánchez.

The music is performed live by Sara Marina Y Emilio Villalba, also they participate as "angels" in this fantasy.

Since Daniel Bianco assume direction of Teatro de la Zarzuela, so much children as young boys son priority in the artistic and educational project Coliseum. The purpose is that the public still without prejudice, gradually get into the habit of indulging in the soul itself our musical heritage Y theatrical, with little effort, using the intelligent fun as a way of learning. This course walks 'Lost in Bosco', which last year brought together over 1.200 children from 6 years, coproduced between the theater and Spanish-Canadian company Claroscvro, and signed by the two alma maters of this: Julie Vachon Y Francisco de Paula Sánchez. They will total 12 functions, Ten for school (of the 14 al 18 from January), Y two are open to the family audience: Saturday 19 and Sunday 20 from January, both at 13h00. All of them Coliseum in Ambigú, made for the occasion in a cozy theater full of red cushions, as an armchair, all laureates with a large white zeta: recognizable trademark.

The theme of the work and the nature of their characters speak to younger, among many other values ​​and directly, of the respect for diversity in its broadest sense. And it does so through a amazing and original puppets they develop the story interwoven with medieval music: Cantigas of Alfonso X the Wise, Codex Calixtinus O Llibre Vermell de Montserrat, they play live Sara Marina and Emilio Villalba, who also participate as "angels" in this fantasy.