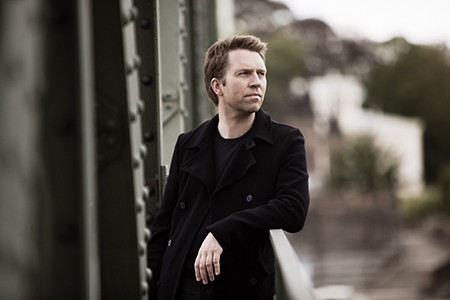 Become a great figure of world piano, Norwegian Leif Ove Andsnes returns to the stage National Music Auditorium Hand Great Performers Foundation Scherzo. The next 24 October will give a recital in which he will perform works of some of the composers that have underpinned its solid musical career, as Sibelius, Schubert O Beethoven. Complete the program compositions J. Widmann Y Chopin.

The newspaper The New York Times ha defined Leif Ove Andsnes as "a pianist in a masterly elegance, power and knowledge”; while The Wall Street Journal he has named "one of the most talented musicians of his generation”. Thanks to its impressive technical and detailed interpretations, the celebrated Norwegian pianist has won the applause from the audience throughout the world, giving recitals and performing in concerts in major concert halls with leading orchestras, Besides being an artist with an active recording career. As an enthusiastic chamber musician, Andsnes founded the Chamber Music Festival Rosendal, which he is also director; He has been artistic co-director Risør Festival of Chamber Music for nearly two decades and worked as musical director of California's Ojai Music Festival Year 2012.

The pianist was introduced on the Walk of Fame in July Gramophone 2013 and he has received honorary doctorates from New York's Juilliard School and the University of Bergen, in Norway, in 2016 Y 2017, respectively.

regular contributor to the New York Philharmonic, Andsnes is a resident artist of the orchestra during the season 17/18. In addition to chamber music and solo recitals, throughout this season the pianist will join the Philharmonic to play the Piano Concerto, Britten, under the direction of Antonio Pappano. further, will address the rarely scheduled Piano Concerto No.. 4, Rachmaninoff, dirigido por Paavo Järvi; and the Fancy, Debussy, con Edward Gardner. These three concerts feature prominently on the agenda of this season.

In recital format, It will embark on an extensive European tour that includes performances in cities like London, Berlin, Leipzig, Vienna, Madrid, Milan and Amsterdam with a compound program, among other works, by a selection of pieces of Sibelius. Unjustly forgotten work of Finnish composer for piano is one of the cornerstones of the new album with Sony Classical Andsnes, It is including Sibelius's own arrangement of the famous Valse triste, fragments of popular Ten Pieces and early Six Impromptus, and expressive Kyllikki. In addition to joining the baritone Matthias Goerne for representation Winterreise, Schubert, in the new Boulez Saal Berlin, the pianist also has several collaborations on the agenda for summer 2018 como on contribución to Dating Terra di Siena Film Festival, in Italy, and the third season of its own Rosendal Chamber Music Festival in Norway.

Last season, Andsnes addressed the Piano Concerto No.. 4, Rachmaninoff, with orchestras such as the Berlin Philharmonic and Boston Symphony; works by Mozart with the Vienna Philharmonic and on tour with the Norwegian Chamber Orchestra; Schumann addition to compositions with Japan's NHK Symphony, where -at second time in 20 year history of the prize- He was named the most outstanding Soloist 2016. He also undertook his first solo tour of South America, interpreting Sibelius, Beethoven, Debussy and Chopin in Brazil and Chile, before repeating a similar program in Japan and South Korea. He met again with Matthias Goerne for a full cycle Threesomes Schubert in Paris and Brussels. With pianist Marc-André Hamelin made a tour US and Europe with a program for two pianos, according The Washington Post, it was about "a meeting of two champions at the top of his game”. One of the central parts of this program was the Rite of Spring, Stravinsky, which is part of the next work Andsnes launch this upcoming season with the Hyperion label.

Perhaps the most ambitious Norwegian pianist achievement to date has been The Beethoven Journey, a project for four seasons with the German master music composed for piano and orchestra that has taken him 108 cities 27 countries, which it meant more than 230 live performances. The award-winning filmmaker Phil Grabsky this initiative has filmed in documentary, Concerto – A Beethoven Journey (2016); while Sony Classical has collected on the album The Beethoven Journey. Andsnes is an exclusive artist for this stamp. His discography includes more than 30 Albums, whose repertoire ranges from Bach to contemporary music. For his work he has received numerous Grammy, Gramophone, Rosette, among other distinguished awards and honors.

With this concert the Scherzo Foundation continues its 22 season after the summer break. The last three concerts are scheduled: el recital the onbeing y los the Piotr Anderzewski (7 of November) y Andras Schiff (28 of November).