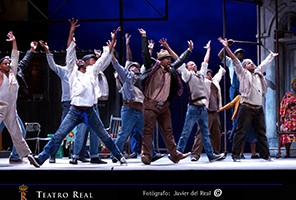 Between days 10 June and 10 of July, he Teatro Real will present nine functions of Porgy and Bess, brothers african american opera George Gershwin (1898-1937) e Ira Gershwin (1896-1983), whose score warns of the obligation to interpret it with a cast and a choir composed only of blacks, since the work portrays the harsh reality of life in this community in a port and marginal neighborhood of Charleston in the period of the economic debacle caused by the crash of the 29.

Porgy and Bess was the third opera to be presented at the renovated Teatro Real, two months after its reopening, in December 1997, with a production from the Houston Grand Opera. Now, 17 years later, will be performed on the same stage by the Cape Town Opera, South African private company that combines its artistic function with a very relevant social component in the country's idiosyncrasy, Following the path of reconciliation initiated by Nelson Mandela after the long and painful period of apartheid.

As part of that reality, members who make up the company, both solo and chorus, They come from different cultures and ethnic groups that make up the wealth multiracial South Africa, what gives the cast a great diversity and a strong emotion, giving a deep meaning to the term 'community'.

This cultural richness of the cast and its integrating dimension come to the fore especially in the production of Porgy and Bess that will be seen at the Teatro Real, of almost naturalistic tints, in which many of the interpreters portray a reality that they have lived or known very closely.

Porgy and Bess -whose famous aria (nana) Summertime, sung by the protagonists, It has become one of the most performed and covered Gershwin songs in the world., tells the story of Porgy, an invalid, Kind-hearted and marginal Afro-American who fights to rescue his beloved Bess from the clutches of criminals who prey on his ambition, innocence and sensuality.

Gershwin articulates with genius and ingenuity the structure of European opera with the richness of African-American folklore., from the gospel of southern slave plantations to the urban rhythms of jazz, blues and charleston playing in the urban slums of the coastal suburbs in the interwar period.

The staging of Christine Crouse, artistic director of the company, translates the original action from the back streets of Charleston in the 1980s 30, to the criminal underworld of Soweto, outside Johannesburg, in the protesters years 70, when the policy of apartheid began to crack.

This mimicry between what happens outside and inside the opera is at the very genesis of the literary work of DuBose Hayward, with a strong biographical character: Catfish Row it's actually cabbage row; Porgy is inspired by the sneaky portrait of Samuel Smalls and many of the character profiles are born from the experiences of the writer.

By transferring the literary plot to the operatic universe, George Gershwin traveled to the original place that the book portrayed and there he approached the Gullah culture, whose mestizo sound world permeated his already rich musical palette, that was born in the Yiddish family musical tradition and was incorporating throughout life the exuberant American urban music, whose different voices could be heard wandering through the bars and theaters of New York.

In the dramaturgy of the stage version of Christine Crouse, once again the opera projects the reality of its protagonists, this time thousands of miles away, in the south of the African continent. As the director explains: “The spirit of our nation is unique and the Cape Town Opera is home to many singers from different cultures and communities., some still living in suburbs, who bring their true voices to performances, extraordinary hearts and souls.”

About the interpretation, notes the British music director Tim Murray, with a strong bond with the company: “Communities in South Africa have a song for every occasion, like the people of catfish row, with their funeral melodies, spirituals and party songs. Gershwin's great genius was to take all these different elements and styles – popular and modern – and merge them into something alive and irresistible.. I think Porgy and Bess is one of the great masterpieces of the 20th century."