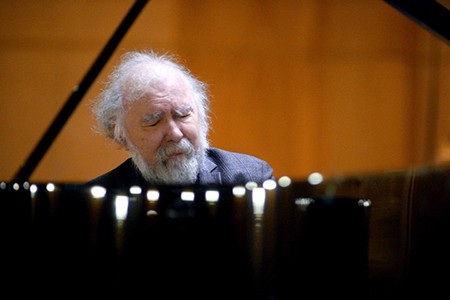 Defined as a myth piano, bright and legendary, Radu Lupu starring the most anticipated return of 23Season Cycle Great Performers of Scherzo Foundation. The musician, not given to public appearances, You have booked an appointment this season to step on stage again Auditorio Nacional de Madrid. It will do next 8 May a program devoted entirely to F. Schubert, the same as repeated two days later to the public of Barcelona's Palau de la Música.

Born in Romania, Lupu began attending classes Lia piano at age Busuioceanu 6 years. With 12, made its public debut with a built completely on your own music program. For several years he continued his studies with Florica Muzicescu and Cella Delavrancea before winning a scholarship 1961 to assist the Russian Conservatory. There he studied with Galina Eghyazarova, Heinrich Neuhaus and later with Stanislav Neuhaus. Early in his career, won first prize in three international competitions: in 1966, Van Cliburn; in 1967, Enescu International; Y, in 1969, Leeds International.

Lupu has performed with the greatest orchestras around the world, including the Berlin Philharmonic (with which debuted at the Salzburg Festival in 1978 with Karajan), the Vienna Philharmonic (with this other group inaugurated the same festival 1986 with Muti), the Royal Concertgebouw and all major London and American orchestras. In United States, his first major appearance dates back to 1972 con la Cleveland Orchestra y Daniel Barenboim, In New York, and then with the Chicago Symphony and Giulini. On the other hand, Lupu has also performed in most major festivals and has been a regular guest in Salzburg and Lucerne.

His recordings for Decca include the Beethoven piano concertos; he concert number 1, German; concerts by Grieg and Schumann; complete sonatas for piano and violin by Mozart with Szymon Goldberg; sonatas for piano and violin of Debussy and Franck Kyung Wha Chung with; and solo works by Beethoven, Brahms, Schumann y Schubert. In 1995 He won two awards in the category of Best Instrumental Record of the Year: a Grammy for Sonatas in A major D664 and B flat major D960, Schubert; and an award for Edision Kinderszenen, Kreisleriana and Humoresque, Schumann. Likewise, Lupu also has two recordings with Murray Perahia (CBS), two albums of Songs de Schubert con Barbara Hendricks (EMI), and a disc of works for four hands by Schubert composed by Daniel Barenboim (Teldec).

In 2006, he was awarded two awards, el Premio Internazionale Arturo Benedetti Michelangeli y, for the second time, the Abbiati, granted by the Italian Critics. Lupu had won the latter also in 1989.

This will be the fifth performance of the 23rd season of Great Performers Series of the Scherzo Foundation, It has scheduled nine concerts this time along 2018. further, Gustavo Dudamel, which garnered a huge, resounding success in the previous season- returns to the cycle with an extraordinary concert in front of the Mahler Chamber Orchestra. Between January and December 2018, experienced pianists, como Mitsuko Uchida, Grigori Sokolov o Murray Perahia, They will share the stage with young and prominent artists as Yuja Wang, Benjamin Grosvernor o Jan Lisiecki.

The ticket price is set from the 25 euros. Young people under 26 years may attend concerts 10 euros going to the National Auditorium box office half an hour before the start of the concert. Throughout more than two decades of life of this cycle sponsored by El País and Cadena Ser, They have acted almost a hundred pianists in more than 200 concerts. These figures have become one of the best cycles of its kind in Europe.