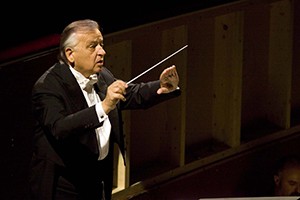 Austrian director Ralf Weikert will replace the teacher Antoni Ros-Marbà in the musical direction of Arabella, Opera Strauss to be released in Gran Teatre del Liceu the next 17 of November.

During the month of September, the teacher Ros-Marbà suffered a series of episodes of tachyarrhythmia that have been reproduced over the past week and that have led to being low at the last minute, having to undergo a rest treatment by medical prescription, according to the medical statement provided to the Theater.
In front of this situation, the artistic direction and the musical Directorate of the Liceu have opted for Ralf Weikert's mastership and seniority, an option that fully satisfies the Theater given the great quality of the master in such a difficult play and in the face of a sudden change. Weikert joins the Orchestra rehearsals today Monday.

He is a regular guest at the festivals of Salzburg, Aix en Provence, Bregenz Y Arena of Verona, among others. He has performed in the most important theaters and auditoriums in the world, as the Staatsoper from Vienna, Bavarian State Opera, German Opera de Berlín, MMetropolitan Metropolitan of New York Y San Francisco.