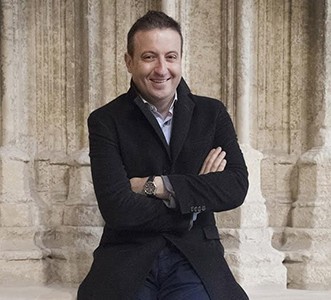 Last 30 January was presented Recital V of the XXIII Lied Cycle that jointly program the Teatro de la Zarzuela and the National Center for Dissemination of Music (CNDM). This time by the countertenor Carlos Mena. It is not this the most common for this type of repertoire tessitura, but the result was very interesting.

The program, very well prepared, It began with songs (Evening, Morning, Night) de This Way to the Tomb (1945), followed by Folk Songs, from Benjamin Britten. The admiration of the composer for Purcell and his taste for the countertenor voice, that was revealed after numerous collaborations with Alfred Deller.

These three songs, that can be accompanied by piano or harp, are already part of Carlos Mena's repertoire. Accompanied on piano by Susana Garcia de Salazar, drew the reflective atmosphere that describes this poetically descriptive work of the morning, evening and night.

This was followed by a selection of five popular songs that were arranged during Britten's stay in the United States while fleeing World War II.. They are contemporaries of some of his masterpieces, as Peter Grimes. Popular songs have a very important weight in Britten's work.

This first part ended with "Cantos del harpista" (Songs of the Harper) from Franz Schubert about Goethe's texts. Text and music go hand in hand in these recreations of the loneliness of those who blame themselves and that Schubert represents with the figure of the harpist.

Carlos Mena's voice is of indisputable beauty. Has grown in volume and elegance, especially in the darkest nuances of its timbre. He hesitated a bit on some bass but his voice support is solid and his phrasing delicate.

The second part was a total record change. A selection of Light Songs, works composed by the composer Alberto Iglesias for Carlos Mena and based on texts by René Char (in French), Wallace Stevens (in English) and Passolini (in Italian) of great complexity. It requires great concentration due to the difficulty of the score and the language change. Iglesias' work describes narrative atmospheres loaded with sensuality and intrigue that force the singer to an extra interpretive effort.

A more than interesting recital for dealing with unusual and always surprising works and tessitura.