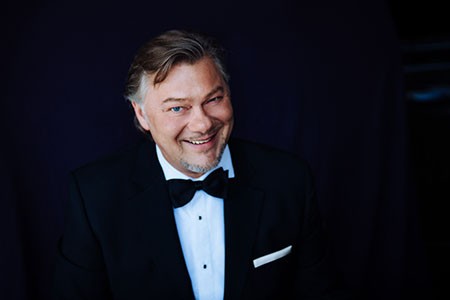 german singer René Pape, considered one of the best basses of his generation, Debuts in XXIX Lied Cycle of the National Center for Musical Diffusion (CNDM) and the Teatro de la Zarzuela, with pianist Camillus Radicke. Both will interpret two key cycles of the Slavic repertoire, the Biblical songs by Antonín Dvořák and the Songs and dances of death de Modest Mussorgski, a cantata by Wolfgang Amadeus Mozart and the delicate songs of Roger Quilter with texts by William Shakespeare. The recital will take place on Monday. 28 November at 20:00 hours at the Teatro de la Zarzuela.

The first concert of the XXIX edition of the Lied Cycle represents a unique opportunity to enjoy one of the most outstanding figures of singing worldwide, that of the German master René Pape (Dresden, 1964). Since I sang the role of Sarastro in The magic Flute Mozart at the Salzburg Festival of 1995, has become an essential name for the main theaters and auditoriums in the world, as well as being a member of the Berlin Staatsoper.

CWith a career spanning three decades and accumulating prestigious awards -among them, two Grammy Awards-, René Pape will give life on stage to some of the masterpieces of the genre, as well as less common musical gems from the repertoire. Despite the fact that German opera is his great specialty, his career as a liederista has been especially applauded for his great technical mastery and his exquisite interpretive skills.

The cycle, one of the most applauded vocal quotes dedicated to the German song on the current international scene, will open with The ye of the immeasurable universe, K 619 Mozart, a lied in the form of an aria that has an aura of mystery as it is not a very frequented work in the usual programs, despite the enormous beauty and musical richness that it possesses. It will be followed by one of the highlights of the night.: ten o'clock Biblical songs by Dvořák, a sample of the best lied with a Czech soul where Pape will adopt a more intimate register.

The second part will begin with the three overwhelming songs of the op. 6 from Quilter, with poems by one of the most universal names of all time, Shakespeare. Is about Come away, death Y O mistress mine, songs found in the famous King's Night, Y Blow, blow thou winter wind, that belongs to modern comedy as you like. The golden brooch will be put by the Songs and dances of death de Mussorgsky, that require a mysterious timbre to evoke the phantasmagorical world of this capital work of the liederista genre.

Appointment with the best liederistas in the world

In addition to having René Pape, one of the greatest exponents of its genre, the XXIX Ciclo de Lied will have other seven recitals season 22/23 CNDM. You can enjoy, for the first time, of the extraordinary voice of the mezzo-soprano Marianne Crebassa, with Joseph Middleton (27 of March). The program will also feature young voices: baritones Andre Schuen, with Daniel Heide (3 of April); Konstantin Krimmel, with Ammiel Bushakevitz (30 from January); Manuel Walser, with Alexander Fleischer (8 of May); and soprano Christiane Karg, with the original accompaniment of the harp of Anneleen Lenaerts (7 February). The return of specialists such as Christian Gerhaher, with Gerold Huber (19 from December) O Ian Bostridge, with Julius Drake (5 of June).