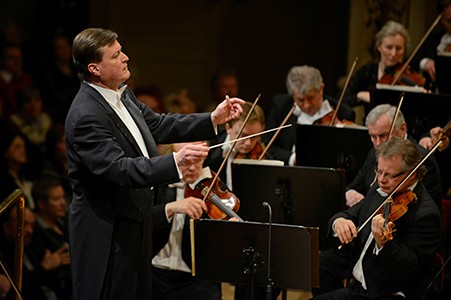 La Staatskapelle Dresden and director Christian Thielemann will be in charge of dismissing the 47Season of the Ibermúsica cycle with two concerts that are about to run out of tickets. In the first quotation, The next Tuesday 16 of May, the group will be accompanied on the stage of the Auditorio Nacional de Madrid by the Russian pianist Daniil Trifonov (Premio Herbert von Karajan 2017); while in the second, on Wednesday 17 of May, American soprano Renée Fleming will address Four Last Songs, from R. Strauss, one of the works that have contributed to its popularity. With this performance, Fleming will celebrate 21 years after its debut in Spain, also within the Ibermúsica cycle.

La State Chapels, German group based in Dresden, it is among the oldest orchestras in the world. Your Titular Director, Christian Thielemann, has been considered as the maximum current exponent of the Germanic tradition in conducting, continuation of the work of Furtwängler Y Karajan. On the other hand, the outstanding pianist Daniil Trifonov arrives at Ibermúsica for the second time (since his debut in 2014 with the Cadaqués / Marriner Orchestra) as resident artist of the Staatskapelle Dresden.

The first performance for the orchestra of Sofia Gubaidúlina, Gods wrath (God's anger), but unfortunately, failed to complete his new orchestral work on time. Instead of it, Maestro Christian Thielemann will direct the Prelude of the incidental music of Pelleas and Mélisande, on. 80 by Gabriel Fauré at the beginning of the concert that night. The program continues with Concerto in G major, from Maurice Ravel, released in Paris in January 1932 by the Lamoureux Orchestra, the direction of Ravel himself and the pianist Marguerite Long solo. To conclude the evening, the Staatskapelle Dresden will tackle Pelleas und Melisande, the first orchestral work completed by Arnold Schoenberg.

The second concert stands out for its attractive program dedicated entirely to Richard Strauss, composer intimately linked to the orchestra. In the third performance of Renée Fleming in Madrid with Ibermúsica, the public will be able to enjoy the presence of one of the best interpreters of their generation. The second part will be dedicated to An alpine symphony, work that could be considered as the last symphonic poem of the German composer and that was dedicated to the Staatskapelle. With a strong poetic charge, this piece evokes the climbing of a mountaineer, how it comes off, among other things, of the notes included by Strauss in the score: "Night", "Sunrise" or "The Ascent".

With these two performances the 47th season of Ibermúsica ends, which have been attended by more than 50.000 people. On several occasions the localities have been exhausted: for the recital of Barenboim and the Messiah from William Christie Y The St. John Passion from Les Arts Florissants; or for this closing concert. Throughout its almost half century of history, Ibermúsica orchestras of almost 40 countries and have been released over 130 works in Spain, including several world premieres. Only in Madrid, Ibermúsica has organized more than 1.100 concerts. The next season of this cycle, that exists thanks to its more than 3.000 subscribers, the day will start 22 October with the inaugural concert of the London Symphony Orchestra under the orders of the famous conductor Bernard Haitink.

PROGRAM TUESDAY 16 OF MAY

WEDNESDAY PROGRAM 17 OF MAY