Live broadcast of Rusalka on the MEZZO channel 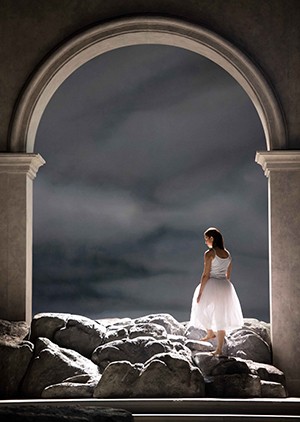 Day after tomorrow, Wednesday, 25 of November, to 19.30 hours, television networks HALF Y TV DOCTORS they will broadcast the opera live Rusalka, by Antonin Dvořák, new production of Teatro Real, co-produced with the Säschsische Staatsoper in Dresden, the Teatro Comunale Bologna, the Gran Teatre del Liceu in Barcelona and the Palau de les Arts Reina Sofía in Valencia, in which it will be presented after its premiere in Madrid.

The opera will be recorded in an audiovisual co-production with Jake Febus, Spanish TV, Half, Unitel and Medici. It will later be broadcast on The 2 of Spanish Television and will integrate the catalog of MyOperaPlayer before its DVD release with international distribution.

Audiovisual recording and broadcasts of Rusalka they have won a special international leadership as the Royal Theater is the only great European lyric theater that is currently presenting staged operas.

Rusalka, premiered in Prague in 1901, was the penultimate of eleven operas by Antonin Dvorak (1841-1904) Y, definitely, the most famous of all those he composed.

the libretto, of the poet and playwright Jaroslav Kvapil, is based on the Central European legend that inspired the book Undine (1811) from Friedrich de la Motte Fouqué and in the story The little Mermaid (1837) from Hans Christian Andersen, in which a water nymph decides to leave her aquatic world at any cost to pursue the prince she loves.

the score, in which the influence of Wagner and the currents of Central European musical nationalism subtly beat, different intertwines leitmotiv and bohemian folklore themes, with a different orchestration to represent the world of nature and spirits -with greater harmonic richness and a diaphanous and delicate timbral palette- and the world of men, with a more conventional and obscure instrumentation.

The stage manager Christof Loy bridges these two seemingly irreconcilable universes, delving into feelings, passions, wishes and contradictions of the characters, what, in a ghostly atmosphere, they go from life to stage, in a production that is a profound tribute to theater as a territory of catharsis and sublimation of emotions.

The Kingdom of Waters -with Rusalka, on the author Padre Vodník, the seasoned sorceress Ježibaba (turned into his mother) and the nymphs, her sisters- hides complex and conflictive relationships between the characters that, in Loy's conception, they transform into a strange and forgotten theater family with a glorious past, whose members, like specters, they live on nostalgic memories, but also illusions. And in that closed space, decadent and evocative conceived by the set designer Johannes Leiacker, with lighting of Bernd Purkrabek and wardrobe Ursula Renzenbrink, everything moves with the dream of a lame dancer in love, who aspires to reach heaven with his pointe shoes and the transforming power of love.