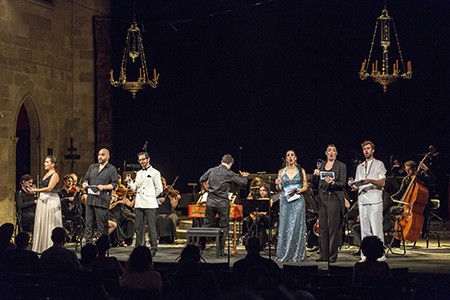 The counter barcelonés Xavier Sabata He has presented for the first time in Spain, the full version of this title the same Händel He rewrote in 1731 for the castrato Senesino. The Iglesia del Carmen has been the ideal scenario where this story has developed Templars and Crusaders with a very theatrical concert version.

Baroque is one of leitmotiv of this year's high-ampurdanés festival. With Rinaldo, a baroque festival begins in the own festival program. A baroque festival has started and will continue tonight with the premiere of a new production eyes & Galatea (08.08) and the concert For Water Music and Royal Fireworks Handel also (15.08), and end with the dance show Foil Mourad Merzouki (17.08).

The countertenor Xavier Sabata, He has led for the first time in Spain the full version of 1731 Handel rewrote for castrato Senesino. The Carmelite church has witnessed this release with a concert version, which he has had the musical direction Dani Espasa command of the baroque orchestra Vespres d'Arnadí and a group of extraordinary soloists, led by Sabata (Rinaldo), who has also raised the theater concept, They have completed Nuria Rial (Almira), Hilary Summers (Argante), Mary-Ellen Nesi (Armida), Juan Sancho (Goffredo) Y Josep Ramon Olive (Mago and Araldo). All of them, They have presented a Rinaldo very humanized, a story interwar, but with love as the main objective throughout the work.

Rinaldo, considered a colossal work, tells the story of love between a Christian warrior and Almirena in the context of the first crusade against the Ottoman Empire. The show has had great interaction between the singers, through a very coded costumes, and treatment of stage space very specific, He has helped the viewer to easily follow the story. The orchestra of Vespers Arnadí, formed for the occasion by 23 musicians, the score has executed flawlessly. A great performance that incorporates all the complicity of the public who has cheered the artists with great applause at the end of the work. With all sold out, the show has been recorded by Mezzo to be broadcast delayed.

Xavier Sabata, resident artist of the Festival Castell de Peralada 2018, It does not end its participation in the festival with this interpretation, but also offer a masterclass as part of the campus Peralada 8 August in Santo Domingo de Peralada Claustro, and it will become a cabaret artist in the show He to, they have created by the film director Rafael R. Villalobos with musical arrangements by Dani Espasa.