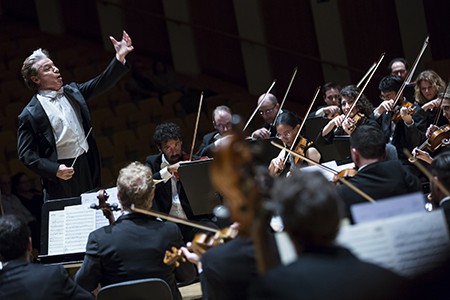 Roberto Abbado directs the next 25 of May the 'Seventh' symphony Mahler with the Orchestra of Valencia (OCV) in the auditorium of the Palace of Arts.

The owner of Les Arts resumes training with Abbado's Mahler symphonic repertoire. Zubin Mehta It was he who initiated the cycle 2007 with his 'Second', known as "Easter", and a year later Lorin Maazel choose the fourth symphony of Czech-Austrian composer for laying along the Auditori de Castelló.

June 2011, the OCV, with Zubin Mehta as music director, He traveled to Granada to inaugurate the LX International Festival of Music and Dance with the 'Third' and Omer Meir Wellber selected in 2013 the 'Novena' for the concert series with which said goodbye to the ownership of the Orquestra de la Comunitat Valenciana.

Likewise, in June 2017, Asher Fisch conducted the 'Titan Symphony' for the debut of the OCV at the Palau de la Música.

Released in Prague 1908, the 'Seventh' consists of four movements and is made without the participation of voice, like the two which precede. Mahler, Besides, He added various unconventional instruments in an orchestra, like guitar or mandolin.

Les Arts reports that ticket prices for the concert range from 30 and the 45 euros depending on the visibility of the different areas of the Auditori.

The maestro Abbado will, for the third consecutive year, the protagonist of the end of the season. In addition to the 'Seventh' Mahler, the Milanese baton will head the orchestra Les Arts concert of the legendary soprano Mariella Devia.

'Damnation of Faust', Berlioz, recently named best show in Italy, It will also feature in the pit Roberto Abbado.