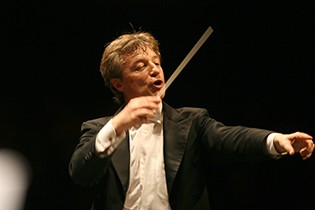 Milanese orchestra director, closes the opera season 2015-2016 Palau with the premiere of "A Midsummer Night's Dream" (A Midsummer Night’s Dream), the first foray into the starting lineup of the Arts in the work of Benjamin Britten. Roberto Abbado assumes the musical direction of this opera based on the novel by Shakespeare, raising the curtain on next 10 of June with its own production of the Valencian coliseum, a bet with which the Palau de les Arts Reina Sofia joins the celebrations 400 years after the death of William Shakespeare.

In addition to his extensive experience in the management of the symphonic repertoire in the United States and European formations referred to as the Amsterdam Concertgebouw, Gewandhaus de Leipzig O Staatskapelle Dresden, the maestro Roberto Abbado has conducted numerous premieres in the most prestigious opera houses in the international arena: the Teatro alla Scala in Milan (La Gioconda, Lucia of Lammermoor, The Lady of the Lake), the Vienna Staatsoper (Sicilian Vespers), the Bavarian State Opera (The Love for Three Oranges, Aida and La Traviata), the Metropolitan New York (Fedora), la German Opera de Berlín (Don Giovanni), Paris National Opera (The Lady of the Lake), Rossini Opera Festival of Pesaro (Ermione, Zelmira, y Mosè in Egypt), and Maggio Musicale Fiorentino (Le comte Ory, Attila, I Lombardi, The Barber of Seville, Anna Bolena, Phaedra), among others. Following the success of public and critics in his first opera as head of the Valencia podium, last January, con of Samson and Delilah Camille Saint-Saëns and extensive experience in the contemporary repertoire and music of the great composers of the twentieth century as Luciano Berio, Salvatore Sciarrino, Henri Dutilleux, Olivier Messiaen, Helmut Lachenmann, John Adams O Hans Werner Henze, among many others, takes up the baton of the Valencian coliseum for the premiere, for the first time at the Palau de les Arts, Opera in three acts based on Shakespeare's play with music by Benjamin Britten (1913-1976) libretto by British composer and Peter Pears, released on 11 June 1960 at the Aldeburgh Festival, direction of the composer himself.

Roberto Abbado has been awarded twice with the prestigious and coveted "Premio Abbiati" Italian criticism.