Rodelinda, Handel, at the Theatre Royal 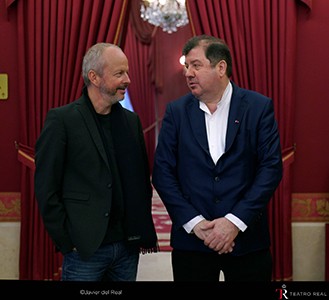 The next 24 March Teatro Real rise for the first time its stage Rodelinda, opera by Georg Friedrich Händel, of nine functions will be offered, until the 5 of April, in a new production of Teatro Real, coproduction of the Frankfurt Opera, the Gran Teatre del Liceu in Barcelona and the Opéra de Lyon.

Rodelinda, one of the titles of the German composer less frequent in the lyrical scenes of the world, and also one of the most beautiful and captivating, It will be offered at Real under the musical direction of Ivor Bolton and scenic conception Claus Guth.

The story takes place in Milan Rodelinda, in the palace of the kings of Lombardy. Rodelinda, devastated by the apparent death of her husband, King Bertarido, and fearing for life and the future of his son, it becomes a heroine full of courage and cunning to challenge Grimoald, the tyrant who has usurped the throne and harasses her to be his wife and to consolidate his power in the state.

The German stage director, Claus Guth, whose work for Parsifal last season Real received a great reception from the public, It is responsible for this new production Rodelinda, in which retells are his usual collaborator Christian Schmidt, for the preparation of scenery and costumes, leaving the development of lighting in the hands of Joachim Klein.

Guth tells the story of Rodelinda through the eyes of his son Flavio, character without a voice in the score, although some instrumental in the development of history, and places the characters within a Georgian house in the heart of English countryside. Little is witnessing events and through their dreams, looks and children's drawings, which they are projected on the walls of the house, the plot is cleared and opens the way that allows us to delve into the different psychological profiles of characters.

Rodelinda, premiered in London in 1725, It is one of the 42 serious operas composed in Italian style by Georg Friedrich Händel. In the purest Baroque style, alternating recitatives and score arias; the word, music and the skill of the singers combine to create moments of great beauty and explore ways of human emotion.

The libretto by Nicola Francesco Haym is based on an original libretto by Antonio Salvi, who is inspired by the tragedy Petharite, King of the Lombards, Pierre Corneille. At, Six characters support the development of history, six similarly dramatic weight, which it gives more coherence to the structure of the work, and here, as happened in Tamerlano, tenor's voice becomes more important.

Adaptation of the staging by David Alden for Bayerische Staatsoper
14 of March, to 18.00 hours

I am meeting with the director of scene Rodelinda.

Meeting with the directors and actors of Rodelinda

The queen of the Lombards

We return to the house to see how he composes Händel