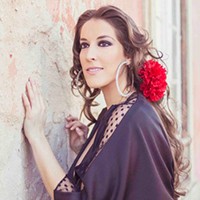 Saturday and Sunday at 10:30 p.m.. at Patio de Armas of El Alcázar Spectators will have the privilege of tasting two main dishes of the purest flamenco: Fire and earth, when art becomes flamenco, figures as Manuel Fdez. Montoya "El Carpeta" Y Miguel Flores Quirós “Cocoon of Jerez, and A journey through cante with Argentina, in a show in which they intervene, Besides, Jose Quevedo "Bolita" Y Eugenio Iglesias, (guitars), Francisco Jose Suarez "The Rock" Y Emilio Castaneda (palmas), Y Mary Chania, bailaora, as guest artist.

Fire and Earth can be enjoyed on Saturday, a show conceived with the purpose of uniting and enhancing the qualities of two great flamenco artists separately and containing, in their personalities, the qualities of these two elements. The fire, represented by the dancer Manuel Fernández Montoya “El Carpeta”, is young, vigorous, enthusiastic, creative, adventurous, passionate, sweeping and impetuous. The earth, in the figure of singer Miguel Flores Quirós “Capullo de Jerez”, is tanned, consistent, persistent, resistant, firm, sober and realistic. Both of them, just like fire and earth, they are as extraordinary individually as they are unique as they come together in this fusion and transmutation of their art. An original flamenco show that fuses Cante, Dance and Prose, uniting for the first time these two outstanding artists. The art of these two flamenco figures is accompanied by a magnificent staging where light and sound, together with an elaborate audiovisual production, go to the beat of this show, And that's when the magic happens...

Likewise, on Sunday Argentina will lead the 40 FS with a luxury concert, expected, full of care, where you can listen to flamenco songs, frescos, natural, surprising for the voice of this young artist who awakens passions. And it is that Argentina is one of the most relevant flamenco voices of recent years, with a solidity that scares so much haste and consistency and with a spirituality that touches the sky between complaints and resounding flamenco cry. Few record debuts are remembered with such an impact on a flamenco artist, cataloged by critics as a work that is among the three best female flamenco albums of the last thirty years, and rewarded to ecstasy. Since then, the only thing that Argentina has done is endorse its good start: various awards and rave reviews, tours and top chart positions.

The Youth Festival ends with two special concerts and a conference

Saturday at 8:00 p.m.. in the Garden of the Mute, the Young Festival will offer a concert full of interest and different sound in the interpretation of music from the Baroque to pieces of the 20th and 21st centuries, by one of the winners of the 12 Intercentros Musicomaniac Contest: Beatriz Tirado (saxophone), accompanied by Marion Chiron (accordion). A program spearheaded by works by J. S. Bach, J. M. Sanchez Verdu, Messiaen, Paavo Korpijaakko and Bartok.

Beatriz Tirado, First Prize at the XII Intercentros Melómano Contest and Prize for the best interpreter of Contemporary Music and the Prize for the best woodwind interpreter is one of the great promises of the sax in Spain. Residents in Helsinki, where he studies a master of interpretation at the Sibelius Academy, has to his credit awards such as the Hazen Intercentros in the specialty of wind (2004), and in the specialty of chamber music (2008) and the First Prize at the IV Nantes International Competition (2011). He collaborates on various occasions with the Youth Orchestra of the Community of Madrid and with the Balearic Symphony Orchestra of the City of Palma., with the group Neopercusión and Plural Ensemble and as soloist with the Ciudad de Elche Symphony Orchestra. In November 2015 will participate as a soloist with RTVE, performing the Concerto for saxophone and orchestra in A. Glazounov.

Marion Chiron (classical accordion and bandoneon) studied at the Regional Conservatory of Cergy-Pontoise, finishing his studies with a First Prize at the age of 16 years. At an early age she was recommended to participate in different festivals, where he attended as a soloist. In 2013 participated with the pianist Jean- Francois Heisser within the framework of the prestigious Chopin Association concerts in Lyon. In 2014 was admitted to the CNSM in Paris, the Higher Pole of Paris Boulogne Billancourt, and at the Sibelius Academy in Helsinki, where he is currently pursuing his higher studies. His activity as a musician outside of France led him to make a concert tour in Rome, Rotterdam, etc. Since 2014 formed part of the group "Les Fleurs Noires", and performs concerts in Paris.

Finally, Sunday at 12:30 p.m.. in the Church of San Juan de los Caballeros, the Clarinet Course organized by the Don Juan de Borbón Foundation will close with a conference by Slim Marine on stress in the musician and how to play under pressure, with free admission until full capacity.