Lusine Khachatryan and Sergey in the Auditorium with Franck Sonata 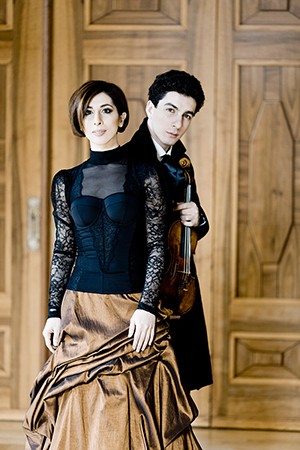 The violinist Sergey Khachatryan will debut next 21 March at the Philharmonic. His extraordinary instrumental level and profound musicality have made him one of the most outstanding violinists panorama. Khachatryan, musician earnestly, grants very few concerts a year and each of his appearances is an event. At the same time, Khachatryan is very proud of the culture of their country of origin, Armenia, a small territory that has a great wealth of popular music that Armenian composers and performers have always claimed.

Debut of a brother duo

The duo of brothers Lusine y Sergey Khachatryan will debut at the Philharmonic, with works by Mozart, Prokofiev and Franck. Children of family of musicians, have grown up studying under the tutelage of their parents, both concert pianists and pedagogues. Lusine and Sergey share a successful career, full of international awards and debuts in the main halls of the world. Since 2002 they have recorded numerous CDs, the last of which is entitled "My Armenia", with works by Armenian composers (2015).

Franck Sonata, one of the milestones of violin literature

The recital will begin with the Violin Sonata No.. 32, Mozart, also known as Sonata Strinasacchi; followed by the Sonata no. 2 in D major, Prokofiev, written in a remote haven for Soviet artists during WWII. The concert will end with one of the milestones of violin literature: the Sonata by César Franck, work of maturity, of purely romantic melodies, which was inspired by the friend and compatriot of the composer, Belgian violinist Eugene Ysaye.

Franck, Sonata in A major

Early in the season 2014/15, Sergey participated in the Lucerne Festival performing Beethoven's violin concerto with the Vienna Philharmonic and Gustavo Dudamel with the prestigious Credit Suisse Young Artist Award.

Sergey and his sister, the pianist Lusine, they perform regularly as a duo. Among his most recent recordings are the CD "My Armenia" released with Naïve Classique and dedicated to 100 Armenian Genocide Commemoration Anniversary, who received the Echo Klassik award in the Chamber Music Recordings category. further, they have recorded together three sonatas for piano and violin by Brahms. Sergey's discography includes a recording of Sibelius and Khachaturian's concert with the Warsaw Symphony and Emmanuel Krivine., as well as both concerts by Shostakovich with the French National Orchestra and Kurt Masur, the sonatas of Franck and Shostakovich for violin and piano and the integral of sonatas and partitas for solo violin by J.S. Bach.

In today's world of classical music, Lusine Khachatryan is considered a “Keyboard poet”.
Born in Yerevan, Armenia, in a musical family, Lusine began his piano studies under the tutelage of
His parents, Irina Hovhannisyan y Vladimir Khachatryan, both concert pianists and pedagogues.

Lusine Khachatryan has received numerous awards throughout his artistic career. Among them is the Musical Advancement Award of from the Baden Cultural Foundation, the scholarship of the “circle of friends” de la Music Academy of Karlsruhe, and a special grant from the German foundation, German Foundation for Musical Life. It has also been awarded at the International Piano Competition in “City of Ostra”, “Marsala city”, in Italy (2003) and at the 2nd European Piano Competition in Normandy, Ouistreham and Le Havre in France (2009).

Lusine Khachatryan also performs regularly as a duo with her brother., violinist Sergey Khachatryan. Together they have recorded their “Debut CD” in EMI Classics in 2002; with the French label Naïve, Sonatas for Violin and Piano by C. Franck and D. Shostakovitch (2007), the Complete Sonatas for Piano and Violin by J.Brahms (2013) and his new CD release “My Armenia” with works by Armenian composers (2015).

In 2012, Lusine Khachatryan created a new art form: “The Piano-Theatre”, in which dramatic art
and classical piano music merge into one piece. Through the theatrical world, music reaches a unique dimension and intensity. Lusine has so far written and produced the following Piano Theater productions: “Maria Stuart” after F. Schiller (2012), “Chopin – “The piano is my second self” (2013), ““Clara Wieck plays Schumann”(2013) Y “LONGING” / “Nostalgia” about the Armenian soul and culture (2015).

Philharmonic offers great concerts with the top artists on the international scene today. Its programming ranges from the baroque to the twentieth century, the great symphony orchestra the most intimate recital and is designed for music lovers enjoy it with the best performers of each repertoire.