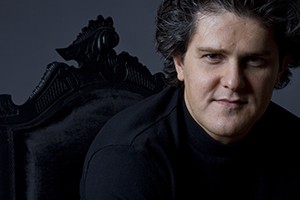 The unstoppable career of Sergio Alapont continues reaping successes and conquering new places; last May he was appointed resident director of the Suzhou Symphony Orchestra -based in the impressive Suzhou Culture and Arts Center in Suzhou, in China-, since he will assume the 1 of January of 2017 and that the Valencian maestro will be conducting six symphonic programs throughout the year in addition to the final concert of the Suzhou International Piano Competition. The city is one of the great metropolises of the Asian country, with more than ten million inhabitants and a huge and growing number of classical music fans from the East.

This Thursday (14 of July) Maestro Alapont conducts again in Italy, none other than the Orchestra del Maggio Musicale Fiorentino (Florence) in a program that includes the Opera Overture Don Giovanni from Mozart, the Concert No. 2 in D major for cello and orchestra, from Haydn (with Patrizio Serino solo) and the Seventh Symphony of Beethoven.

Among the recent successes of Maestro Alapont are several functions of Idomeneo, from Mozart, at the Opéra National du Rhin in Strasbourg and Mulhouse and the Award for Best Opera Director in Italy 2016 awarded by GBOpera magazine, by your address of Aida, from Verdi, at the Sassari Theater.

After the engagement in Florence, La Traviata will direct the days 29 Y 31 July at the Orizzonti Festival of Chiusi, of which he is musical director, and in which he will also conduct two other concerts on the days 1 Y 5 of August. For the start of the season 2016-17 An operatic Gala awaits you at the Santanyí Opera Festival (Mallorca, 3 of September) and will once again go up to the podium of the Valencia Orchestra for the closing concert of the 50th anniversary of the Francisco Tárrega de Benicássim International Guitar Competition; in October he will direct Rule, from Bellini, (days 14, 16 Y 18) at the Teatro Comunale de Treviso, The Barber of Seville, from Rossini, in Pamplona (AGAO, days 27 Y 28 the same month), three concerts with the Castilla y León Symphony (23 and the 25 of November), and two concerts at the Teatro Massimo Bellini in Catania, before traveling to Israel to direct The Marriage of Figaro, from Mozart, and Haiffa (18 Y 19 from December).