Sevilla opens to Europe and the Mediterranean Dance Month 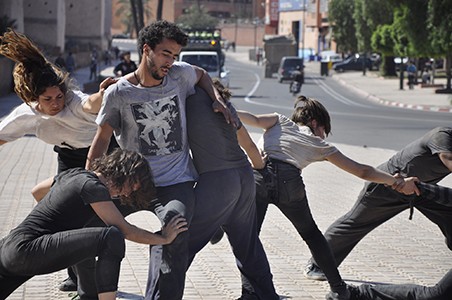 MONTH OF DANCE, contemporary dance festival in Seville, will present the next 28 October (18h, Pavilion of the Future) the premiere in Spain of “Shapers”, training project and creation for young performers dance around in public spaces. A draft Euro-Mediterranean cooperation between France, Spain, Morocco, Egypt and Bosnia-Herzegovina which is funded program Creative Europe.

Led by veteran French company Ex Nihilo, reference in choreographic creation for public space and MES visited on several occasions DANCE, "Shapers" accompanies between April 2016 and September 2018 a 8 young dancers from different countries-Egypt, France, Morocco, Spain- which they are participating in the creation of a choreographic piece and participating in other activities such as courses, workshops, conferences, meetings, all around themes that question the relationship with the city, with public space and passersby.

In 2016 DANCE MONTH perform national auditions for incorporating 2 Spanish dancers in the project, hosted an artistic residence "Shapers" and showed the work done in the cycle "Process Creations". In 2017, after periods of collective work in the different countries participating in the project, It premieres internationally Nassim El Raqs Festival in Alexandria / Egypt last May. Now in this edition 24, the team presents the premiere in Spain of the piece in the cycle "Dance in Unique Spaces".

"Shapers" also it represents a special role in the Penitentiary Center Sevilla I. DANCE MES works for the second year with SOLIDARIOS, NGO working since 20 years bringing culture to people who are deprived of their liberty, trying to generate synergies that favor relations between internal, guests and volunteering; the last function within the MES will be DANCE 5 November at the C3A – Center for Contemporary Creation in Cordoba Andalusia hand of the Arab House, who wanted to join in this way this project intercultural cooperation.

Also as part of the formation, Dancers "Shapers" participate with Conservatory students in the Choreographic Workshop Lali Ayguade and attend all shows MONTH OF DANCE.

For its peculiarity and uniqueness, This project has aroused a genuine interest nationally by both festivals and the Ministry of Culture itself for presentation within the framework of the Mediterranean Games.

"Shapers" has had in Spain with the support of the French Institute, Three Cultures Foundation and Casa Arabe. Likewise, for the premiere in Seville Dance Month he has had special support from Canal Sur Radio and Television.

In addition to "Shapers", between 26 October and 1 of November, MONTH OF DANCE develop its traditional cycle of Unique Spaces Dance in more than twenty performances in venues such as the courtyard of the Archivo de Indias, New York Pier, Paseo Colon, the Plaza de San Francisco, Plaza Virgen de los Reyes Metro Door or Jerez.

MES scheduling DANCE 24 It will last until Sunday 5 November and is available in full in mesdedanza.es.