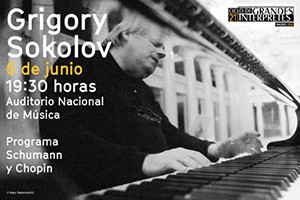 “Many consider, simply, the greatest pianist alive” The Independent.

Two of the crucial representatives of the Russian school of pianistics today appear this beginning of June in the cycle Great Performers of the Fundación Scherzo: Grigori Sokolov Y Elisso Virsaladze. The first is considered one of the greatest living pianists and in recent times, It is according to most critics, is at the zenith of his already long career.

He was born in Saint Petersburg (then Leningrad) in 1950. It was there that he trained musically at the conservatory and gave his first recital in the city to the 12 years. With only 16 won the International Competition Chaikovski of Moscow and his candidacy was defended by the president of the jury, Emil Gilels. But, while numerous winners of the contest in other editions set out to quickly achieve world fame, Sokolov's trip was restricted. Other Soviet artists fled to the West in search of greater personal freedom, but the interpreter preferred to stay in Leningrad and focus on his art. It was only after the fall of the Iron Curtain that it began to enjoy wider international recognition..

He has worked with orchestras such as the Amsterdam Concertgebouw, New York Philharmonic, Munich Philharmonic, Vienna Symphony, Montreal Symphony, Orchestra of the Teatro alla Scala and Philharmonics Moscow and St. Petersburg.
A few years ago he decided to dedicate his entire activity to recitals. A) Yes, He performs regularly at the Vienna Konzerthaus, la Philharmonie of Berlín, el Théâtre des Champs Elysees París, the Concertgebouw in Amsterdam, Zurich Tonhalle, the Philharmonia Warsaw, the Auditorio Nacional in Madrid, the Milan Conservatory, the Academy of Santa Cecilia in Rome, La Fenice in Venice, as well as rooms Munich, Hamburg, Barcelona, Stockholm, Helsinki, Lisboa, Luxembourg, el Festival Piano, Colmar Festival and the Festival of La Roque d'Anthéron.
Sokolov es artista exclusivo de Deutsche Grammophon. After his debut on the label in 2015 with his Salzburg Recital, which was very successful and was the best-selling classical music album that season, his new album, that appeared in january, collects some of the last pieces of Schubert, like the Impromptus or the powerful sonata of Beethoven, ‘Hammerklavier’.
He has performed in 17 occasions in the Cycle of Great Performers and always transformed each concert into one of the sublime appointments on the calendar. As commented Rubén Amón after his last appearance on the Scherzo poster, humanity is divided into two categories: "Those who heard Sokolov at the National Auditorium last night and those who didn't".

Monday 6 June at 19:30hours at the Auditorio Nacional de Música in Madrid.