Sondra Radvanovsky stars in a new ABAO on Stage recital 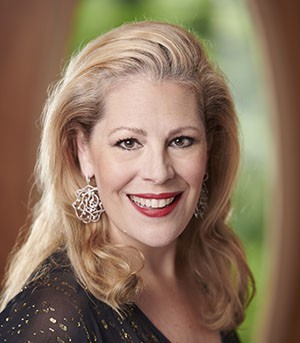 Belcantista magic stars in the recital of the great American soprano Sondra Radvanovsky, Saturday 1 May at the Euskalduna Bilbao at 19:00h with the sponsorship of the BBVA Foundation.

Sondra Radvanovsky is one of the most acclaimed sopranos today. The sincerity, the passion and the strength that it gives off on stage, they have turned her into a great figure, applauded by both critics and the public. He dazzles in the best theaters in the world for his charisma and vocal power.

Well known as a relevant Verdian soprano, also plays roles such as Tosca with enormous success, Aida or the Mermaid. In 2016 was commissioned by the MET to interpret Donizetti's Three Queens: Ana Bolena, Maria Stuarda Y Roberto Devereux, becoming the first soprano to accomplish this feat in the same season. Since then, these roles have been iconic in her career and have earned her the qualification of "queen of queens.".

At ABAO Bilbao Opera he already demonstrated his brilliant vocal ability with his interpretations of Leonora in The Troubadour in 2002, Rusalka in 2005 Y Maria Stuarda, one of its emblematic characters, in 2013, becoming one of the favorite voices of the Bilbao public.

On his return to the ABAO stage, accompanied on piano by maestro Vincenzo Scalera, with whom he has recently performed at the Metropolitan in New York in a recital with Piotr Beczała, has chosen an interesting repertoire that combines opera scenes with lyrical songs of great melodic beauty. His deep and beautiful voice and the spectacular volume of his register, portend a spectacular performance, of those left for the memory of the fan.

He begins the program with the theme "Amaryllis my beautiful" by Giulio Caccini, an aria that although it is not inscribed in an opera, the lyrics come from a legendary love story: that of Alteo and Amarilis.

Continue with another mythological love story with “O, of my sweet ardor "de Paris and Elena Gluck. Paris's declaration of love is a piece of great difficulty and enormous beauty, and is performed for the first time in ABAO. It is followed by a selection of four songs, "Gentle girl dance" by Durante, and three from Bellini: "For pity, my beautiful idol ", "But make it content" y "The Remembrance". Bellini's pieces have all the charm and elegance of the composer's romantic style and convey his melodic purity..

It continues with Bellini and the final scene of Imogene from The pirate. A dazzling aria full of dramatic force.

Considered one of the best Verdian sopranos of today, The composer of Busetto could not be absent from the program. "Silence the placid night" of The Troubadour y “Mercè, beloved friends ”de Sicilian Vespers, both require a sublime and refined vocal writing with moments of great delicacy and others of exciting expressiveness.

In a change of style and expression comes the irresistible “Sola, lost, abandoned "de Manon Lescaut Puccini, that will bring a climate of extraordinary passion and dramatic sense. One of the great repertoire arias, with the feelings of the puccinian heroine on the surface, and a moment of great brilliance for the soprano.

An aria with a powerful dramatic effect closes the program: "The Dead Mother" by Andrea Chénier, with the impressive lyrical intensity of Giordano's work. Introduced by a cello solo and passionate like few others, the deep emotion of the famous aria by Maddalena di Coigny will put the finishing touch to the strength and brilliance of the soprano.