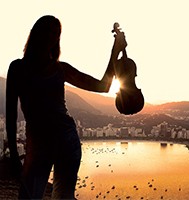 One of the great divas of the violin, Viktoria Mullova, It presented on Tuesday 17 of March, in the Chamber Hall of National Music Auditorium in Madrid, his new album Stradivarius in Rio, within the FRONTERAS cycle of CNDM (National Dissemination Center Musical). On stage he will be accompanied by her husband, cellist Matthew Barley; guitarist João Luís Nogueira Pinto Y Paul Clarvis to percussion. The program, made up of classics of Brazilian music, includes themes of Caetano Veloso, Chico Buarque, Antonio Carlos Jobim, Marisa Mountain, Zequinha de Abreu Y Claudio Nucci.

Mullova's idea to record the Brazilian songs of Stradivarius in Rio was born in the course of various informal concerts with friends over the last few years.. Little by little it took shape and Mullova formed the group to include the guitarist from Rio., Carioca Freitas, cellist Matthew Barley and two percussionists: the Brazilian Luiz Guello and Paul Clarvis, with whom he previously collaborated on two non-classical music albums. In August 2013 took the group to Rio de Janeiro to record the album in three exciting afternoons and their concert within the current CNDM season is their live performance in Madrid. Mullova comments that: “People ask me why I have carried out such a different project and recorded an album of Brazilian music. The answer is very simple: I love that music. Stradivarius in Rio is my third ‘non-classical’ work., but this is the first project that I have carried out on my own, from choosing songs to convincing some of my favorite musicians to collaborate with me ". The Stradivarius to which the title alludes is his Stradivarius of 1723 Jules Falk.

Viktoria Mullova (Moscow, 1959) studied at the Central School of Music and the Moscow Conservatory. His extraordinary talent attracted international attention when he won first prize at the Helsinki Sibelius Competition in the year 1980 and the Gold Medal at the Tchaikovsky Competition in the year 1982, that was followed, in the year 1983, for his exile to the West. Since then he has performed with most of the orchestras, most important directors and festivals in the world. She is famous throughout the world for being a violinist with exceptional versatility and musical integrity.. Her musical curiosity leads her to interpret and explore works ranging from baroque to contemporary music, experimental and fusion. Her interest in a genuine approach has led her to collaborate with musical groups such as Orchestra of the Age of Enlightenment., Il Giardino Armonico, Venice Baroque, the Revolutionary and Romantic Orchestra y Academia Byzantine, group with whom he has recently recorded a Bach concert CD. He maintains a close collaboration with the harpsichord player Ottavio Dantone, with whom he has made several tours and recorded the program "Todo Bach", that Tim Ashley commented in these terms in ‘The Guardian’: Hearing Mullova play the music of Bach is, simply, one of the most sublime experiences within our grasp… ”Her recording of Bach's solo sonatas and partitas represent an important milestone in Viktoria's personal journey in music. The recording has received extraordinary reviews which has led Viktoria to tours of several seasons giving recitals of Bach. His forays into creative music began in the year 2000 with the album Through the Looking Glass in which he performed popular music, jazz and pop with arrangements by Matthew Barley. His exploration continues with his second album The Peasant Girl., a project with the Matthew Barley Ensemble that he also presented two years ago in Madrid with the help of the CNDM. This project showed its peasant roots in Ukraine and explored the influence of gypsy music on the genres of classical music and jazz in the 19th century. 20. His next dates include concerts with the Hallé, Philharmonia Orchestra, Chamber Orchestra of Europe, French National Orchestra and a tour with The Age of Enlightenment Orchestra in the United States and the United Kingdom. Viktoria will also offer recitals with Katia Labèque throughout Europe and South America.