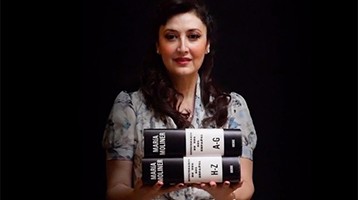 He Teatro de la Zarzuela presents the world premiere of the opera based on the life of María Moliner. The idea for this book began life back in 2012 Hand Paco Azorín, its stage director, who had the good sense to call the author of the music, the composer Antoni Parera Fons, the author of the libretto, Lucia Vilanova and the one who would be the protagonist of such a unique character, brava Maria Jose Montiel.

The work focuses on the second half of the life of the lexicographer María Moliner when, making a virtue of necessity, and using the cultural confinement to which it was forced after Franco's victory in the Civil War, decides to realize his amazing idea: the feat of doing it alone, in his house, a dictionary whose substance put in evidence the dictionary of academics...
The creation of this opera stems from Paco Azorín's idea of ​​vindicating the figure of the great lexicographer. with libretto (2012) by Lucía Vilanova and music (2016) by Antoni Parera Fons, Azorín's own stage direction is conceived as a contemporary documentary opera "intended, written and composed for today's audience". A synthesis of musical drama that uses a modern formula full of contrasts and emotions. In it everything is a scene, is theater and therefore, is full of pulse. According to its composer, Antoni Parera Fons «I composed it without fear of touching the danger. It was a jump without a net». Víctor Pablo Pérez

Choir of the Theater of La Zarzuela