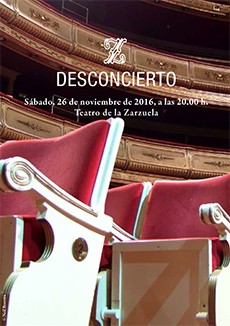 He Teatro de la Zarzuela will present the next Saturday 26 of November (20h), in its concert series, a particularly emotional recital by the context, stage and artists converge on it. 'Bewilderment', that very purpose so wanted to baptize the protagonists, gathers the pianist Rosa Torres-Pardo, the singer Rocio Marquez and actor Alfonso Delgado, three great scene, each in his discipline, to celebrate music Enrique Granados, Isaac Albeniz, Manuel de Falla, Joaquin Turina and Federico García Lorca. The show also revolves around Luis Garcia Montero poems, exerting exact situation and epilogue.

The appointment is poignant for various reasons, all weight. On the one hand, this heterogeneous gathering of talents coincides with the commemoration in this 2016 of the 100 years after the tragic death of Enrique Granados, with the 80 the murder of García Lorca and the 70 the death of Manuel de Falla.

Not in vain, the title of each of the three blocks that make up 'Puzzling' is dedicated to one of these geniuses: First, ‘Goyescas’ (whose premiere, In New York, also this year celebrates a century), for Granados; the second: ‘Lorquiana’, Lorca, and Albéniz, and Falla; and the third, 'The love wizard', Falla, whose music "compadrea" with Turina.

The excitement is even greater if one takes into account that all of them, throughout his life, referent had this scenario, even Lorca, acting seven months before his death at the premiere of "The horns of Don Friolera" Valle-Inclan; Lorca, whom Writers Association dedicated a tribute in this same theater a month after the fatal event.

And now return to that at some point was home, hand of these three powerful artists. Rosa Torres-Pardo, one of our most international pianists and artistically restless; Rocío Márquez, really happy today flamenco since in 2008 Mining Lamp won the Festival del Cante de las Minas Union and the first four awards.; Y Alfonso Delgado, with a masterful baggage of more than 30 years on stage, in film and television.

Y Luis Garcia Montero in the air: "Before the concert is confusion, the need to agree, to seek a sense, that your five and my four measure the same. "In this way the proposal defines the poet of these three performers as disparate, and so next time your 'Puzzling'.