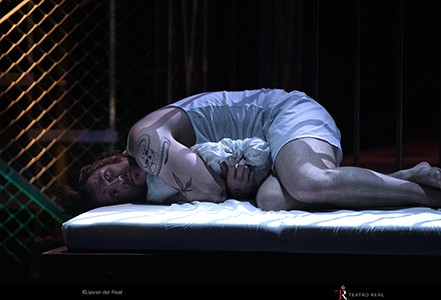 Between days 26 January 9 February the Teatro Real offer 6 functions Dead Man Walking, from Jake Heggie, in a production of the Lyric Opera of Chicago from the Houston Grand Opera, where he appeared in 2011 with two of the singers who will perform the opera at the Royal Theater: mezzosoprano Joyce DiDonato and soprano Measha Brueggergosman.

With more 300 functions worldwide, ─desde diverse productions conservatories large teatros─, and two CD recordings ─protagonizadas by Susan Graham (2000) and Joyce DiDonato (2011)─, Dead Man Walking It opens in Spain with the presence of its composer and Sister Helen Prejean, author of the autobiographical book that inspired the opera and, before, in 1995, the acclaimed film Death penalty, Tim Robbins, with Sean Penn and Susan Sarandon (who won an Oscar for his performance) in the lead roles.

In his shocking story based on real events, Sister Helen Prejean has the disturbing and convulsive way of approaching a death row inmate who attends and protects the conviction that his repentance will help you find inner peace.

If Tim Robbins film clearly impinges on the ethical dilemmas of the death penalty, Heggie's opera, with libretto by playwright veteran Terrence McNally, It is an inner journey that started alongside the nun and the reo, each with its ghosts, their fears, contradictions, their feelings and doubts. In this way transformation and redemption, both are confronted with the weight of events: the thirst for revenge of parents of teenagers killed, the distress and suffering of the mother of a murderer, the struggle for the inviolable right to live, the relentless approach of death ...

Masterfully using vocal writing ─Jake Heggie has a catalog of more than 200 canciones─ language and with a musical heir of the American opera, Dead Man Walking seduces the viewer with a tonal language, African rhythms, melodies that evoke the spirit of the Street 42 and an orchestral and choral score of dramaturgical powerful force, who never shuns direct and emotional communication with the public.

An ensemble cast give voice to this opera, which will reach the Royal Theater with acclaimed staging Leonard Foglia, deep knowledge of the work of Jake Heggie, with whom he has collaborated in preparing the libretto The End of the Affair and the staging of all his operas.

Joyce DiDonato He will assume the lead role, with baritone Michael Mayes, who will play the murderer Joseph de Rocher, one of his favorite roles, he has played in a dozen productions in the United States. They will be backed by a broad range ─Maria Zifchak, Measha Brueggergosman, Damian del Castillo, Roger Padullés, Maria Hinojosa, Toni Marsol, Marta de Castro, Was VICENÇ, Enric Martínez-Castignani, Celia Alcedo, Marifé Nogales, Tomeu Bibiloni, Pablo Garcia-Lopez Y Alvaro Martin─ acting by the children's choir Little Singers of ORCAM and the Headlines Choir and Orchestra of the Teatro Real, under the direction of Mark Wigglesworth.

Dead Man Walking will come to Spain preceded by a path of success, Jake Heggie attributed to the intrinsic power of opera as an art that excites and invites reflection: “the theater offers us the opportunity to get carried away by the drama to unexpected places, and the music puts us in touch with aspects of human nature in which we would otherwise repaired.”

De Weill a Sondheim: Tradition and innovation in the Broadway musical