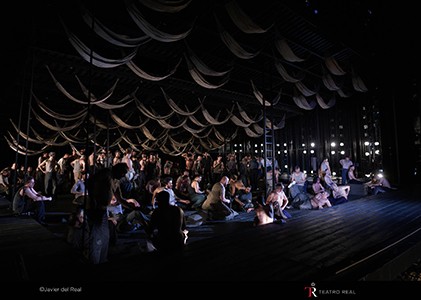 This is the first time a Spanish theater gets one of the prestigious awards.

He Teatro Real He has been awarded the International Opera Award 2018 Best New Production for his portrayal of the opera Billy Budd, Benjamin Britten, created by stage director Deborah Warner last season. The award, that falls for first time in a Spanish theater, He has been picked up by the artistic director of the institution, Joan Matabosch, in a ceremony that took place at the iconic London Coliseum in the British capital.

The Royal Theater was one of the favorites in this edition, to which she attended as a finalist in four major nominations: Best New Production (Billy Budd, Benjamin Britten), best Coro, Better recovery of a Work (Bomarzo, Alberto Ginastera) Y Best Opera Company.

prestigious International Opera Awards 2018 each spring are delivered in London and are a recognition of the talent and creativity in the world of opera, the effort and work done during the previous year.

Billy Budd, one of the best operas of Benjamin Britten, It was presented for the first time in Madrid 31 of January of 2017 at the Royal Theater with a new production conceived by Deborah Warner, enthusiastically received by audiences and great critical acclaim, both for its scenic merit and the excellent musical interpretation of the soloists and the Chorus and Orchestra Headlines the Royal Theater under the direction of its principal conductor, Ivor Bolton.

Respecting the most veiled and inscrutable spaces Melville tale that underlies the opera, treated with modesty and rigor by Benjamin Britten and librettists of the opera, Deborah Warner staging conceived without judging the characters and shunning the most simplistic separation between good and bad.

THE COUNTRY: Real debuts a memorable and unsettling 'Billy Budd'. There is no second than irresistibly theater. All parts mounting work with unusual precision.

THE WORLD: He arrives at the Teatro Real in a finished version of professionalism and colorful theatricality, enthusiastically received by a public, perhaps he perceived rather than the niceties of moral fable, the strength and chafarrinón Cliffhanger.

THE REASON: A huge seemingly empty stage, but full of technical complexity, simulates perfectly the boat libretto and prison that appear enclosed beauty, goodness and justice in a claustrophobic environment and violent.

OPERA (United Kingdom): Billy Budd arrives first at the Royal Theater in a sensational new production made only a Shakespearean director as experienced as Deborah Warner could achieve.

OPERA MAGAZINE (France): The scenario of this captivating new production of Billy Budd is open as soon as the viewer enters the room [..} We admire his ability ( Deborah Warner) to create tableaux of infinite beauty and poetry.

OPERNWELT (Germany): In general, It's a great performance, dark and dense at all times. The overall effect works compactly, with a bright male choir of sixty members and a direction of Ivor Bolton perfectly planned, successfully performing Britten score.

OPERA NEWS (USA): Masterful production of Warner reminded us that the hypocritical and oppressive society that Britten faced half a century ago is still with us, and Billy Budd still valid.