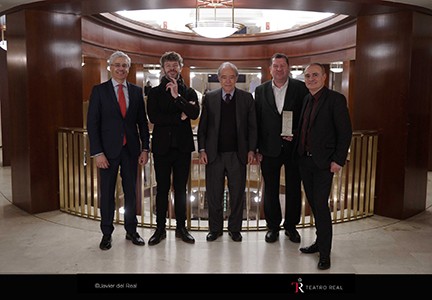 He Teatro Real will culminate the celebration of the 200 years of its founding with the Season 2018-2019, whose programming grows with a look into the past and a bold step into the future, completing a part of their artistic project and taking on new challenges and initiatives able to seduce all audiences. The dream that was born in 2016 in an effort to recover and increase the repertoire, open to new audiences and diversify the cultural offer, see fulfilled many of their expectations.

Fifteen operas the backbone of the new programming, ten of them new productions, three guests productions and two in concert. Great composers along with those who make a historical journey from the seventeenth century to the twenty-first century, accompanied by the best voices today, the most prestigious stage directors and the Choir and Orchestra of the Teatro Real Headlines, Baroque formations besides great career as the Baroque Orchestra of Seville, Akademie für Alte Musik Berlin y el Vocalconsort Berlin.

The three conductors associated with the Royal Theater: Ivor Bolton, director musical, Pablo Heras-Casado, principal guest musical director, Y Nicola Luisotti, musical associate director, will strengthen its presence in front of the Titular Orchestra of the Teatro Real. The first two titles whose composers are part of their most beloved repertoire La Calisto, de Francesco Cavalli and Idomeneo, of W. a. Mozart, and a contemporary third, Only the Sound Remains, de Kaija Saariaho. The second, After the magnificent reception obtained by his version of The Flying Dutchman R. Wagner, immersed in the tetralogy of German composer, which will begin next January with Rheingold and will continue in the next three. And Nicola Luisotti lead the probably most popular title of the season, The troubadour y junto with Faust, Turandot.

Teatro Real return to the reference names in the scene direction. Alex Olle (La Fura dels Baus), closely with Alfons Flores, You will be responsible for opening the season 2018-2019 with his personal vision of Gounod's Faust, myth that has been addressed on numerous occasions and from different disciplines, theater and film, and whose premiere in Amsterdam was very well received by critics. Peter Sellars, loved and admired by the public of Madrid, It will show its award-winning version of the opera Only the Sound Remains, Finnish composer Kaija Saariaho, inspired by Japanese Noh. Robert Wilson will face for the first time Turandot, in a new production that will be released in the Real and that will mean the return of Pucciniano title twenty years after his debut in the first season of the reopening of the Teatro Real.

Robert Carsen will be the protagonist of programming with its participation in two productions: Idomeneo, along with Ivor Bolton, and the gigantic project of Wagnerian Ring, which will start in 2019 Das Rheingold with with Pablo Heras-Casado in musical direction. David Alden continues its close collaboration with the Real with delicious Baroque Calisto and Laurent Pelly put your sense of humor, well known and loved by the public of Teatro Real, for the last Verdi opera, Falstaff.

Oscar Garcia Villegas, Com that voice; Marta Pazos for Je suis narcissist; Christof Loy at the premiere of Capriccio at the Royal; Justin Way in The Plague and Francisco Negrin with Il trovatore, complete payroll opera stage directors in the new season.

The Royal Theater will feature two reference rooms of the theater area of ​​Madrid. On the one hand, the world premiere of the opera Je suis narcissiste, with strong feminine accent - composition Raquel Garcia-Thomas, Tornedo Helena libretto and stage director Marta Pazos- It will be held in collaboration with the Spanish Theater. For another, the premiere in Spain of that voice Com, de Stefano Gervasoni, Ships will take place at Matadero.

The dance season grows with the presence of five companies in its programming: el Ballet de am Rhein Dusseldorf y Duisburg, will make its presentation at the Royal Theater with choreography that explores and risks, huge visual and musical force, inspired by Brahms German Requiem; National Dance Company, He will return to show us his more classical side with a new adaptation of The Nutcracker from the perspective of José Carlos Martínez; the Ballet de l'Opéra national de Paris will offer a program composed of five choreographies, between tradition and modernity, signed by George Balanchine and Jerome Robbins. Sasha Waltz & Guests, He twinned music, opera and dance, transgressing the conventional limits, to make an inspiring version of the opera Dido & Aeneas, Victor Ullate Ballet and celebrated the 30th anniversary of the company with the presence of large dance figures formed by the Aragonese master.

Commitment to the younger, collected in programming 'Real Junior', it strengthens both the playfulness and training. Seven shows will be offered, one more than in the current season, five of which are new productions, with the participation of big names like the versatile Luis Piedrahita, the puppet company La Maquiné -winner a Max Award- or the renowned stage director Tomás Muñoz, in addition to the collaboration of the Titular Orchestra of the Royal Theater and the Youth Orchestra of the Community of Madrid. It also continues the collaboration with Fernando Palacios, both in presenting concerts in the series 'All the Gayarre'. Some of these shows can be seen through Digital Palco centers of the six autonomous communities with which the Teatro Real has signed cooperation agreements: Cantabria, Castilla y León, Castilla la Mancha, Murcia, Andalusia and Madrid.

Summer Workshops for children are inaugurated the Real Junior, LOVA project continues (Opera learning a vehicle) and course consolidates 'college scene'. Alongside these courses, and the growing demand for new audiences, born two new introductory courses to the opera to be added to existing: 'Opera exposed' and 'case Courses'.

stage Digital, the internet platform of the Royal Theater, expands horizons and develops new projects. In the new season will be held major co-productions for television and DVD with titles featured programming: Faust, Turandot, Rheingold, Idomeneo and Falstaff, besides broadcasting in cinemas in Spain, Europe and Latin America title in other seasons as The Flying Dutchman, Madama Butterfly, La traviata, Billy Budd, a Nueva Faust. Not forgetting the cycles of retransmissions to municipalities, autonomous communities and cultural institutions nationwide and expected internationally in countries like China and Japan.

The Teatro Real strengthens its project to bring opera more and more public thanks to broadcasts of popular titles in squares, auditoriums, museums, cultural centers and town halls throughout the Spanish geography and, with the support of new technologies, throught social media. It will be held a new edition of the Week of opera and close the season, one more year, the celebration of Universal Music Fesival in what will be its fifth edition.

One of the funniest works of the baroque, Satirical and full of entanglement, redescubierta today, will be headed by Ivor Bolton, specialist in Baroque music and music director of the Teatro Real. Performed by the Baroque Orchestra of Seville with a double cast that highlight the voices of sopranos Anna Devin and Louise Alder, Bacelli the mezzosopranos Monica and Teresa Iervolino and countertenor Xavier Sabata Time and Mead, in a production from the Bayerische Staatsoper in Munich designed by David Alden.

Dido & Eneas, from Henry Purcell (1659-1695). It will be the first full version of this title staged at the Royal Theater. Music and dance coexist in a show designed by Sasha Waltz for your company, whose musical direction is by Christopher Molds in front of the Akademie für Alte Musik Berlin and Berlin Vocalconsort.

Asher Fisch in musical direction and Christof Loy in stage direction, will conduct the premiere at the Royal Theater last opera by German composer with a new production that will be presented in Madrid scenario in co-production with Opernhaus Zurich and Gothenburg Opera.

Based on the novel by Albert Camus, the Spanish author composes an oratory in which he is responsible for music and libretto, and which it makes a dark reflection on human nature. The work will be preceded by two scores of Benjamin Britten: Sinfonia da Requiem and the song cycle the iluminations. British tenor Toby Spence will be the only solo voice by the Choir and Orchestra of the Teatro Real under the musical direction of Juanjo Mena.

Only the Sound Remains, from Kaija Saariaho (1952)

First collaboration with Teatro Real Teatro Spanish, in whose room will place the premiere of this new composition with libretto by Helena Tornedo and stage direction by Marta Pazos. A funny satire told and sung in an atmosphere of pure actuality.

Only the Sound Remains, from Kaija Saariaho (1952)