Teatro Real and fantasy of The Nutcracker CND 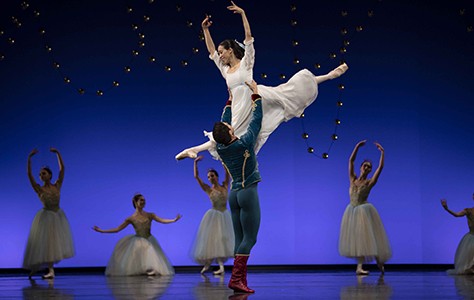 He Teatro Real Advance your Christmas spirit to immerse yourself in the fantasy of The Nutcracker, one of the great titles of the repertoire of classical dance, and one of the best known Chaikovski, with the new production of the National Dance Company, conceived and directed by its director, José Carlos Martínez.

representations, which will take place on 3, 4, 6, 8 Y 10 of November, the latter two sessions, to 17.00 and to the 18.00 hours, will have live music performed by the Head of the Royal Theatre Orchestra and the participation of Little Singers of ORCAM, all under the direction of maestro Manuel Coves.

This is the second great classic title that the Company has put on stage and they have put effort into it, enthusiasm and intense work whose result is the largest and most spectacular production since José Carlos Martínez, responsible for choreography and stage direction, assumed the leadership of the CND. In this ambitious project he has had the collaboration of Monica Boromello, in the scenery; Iñaki Cobos, in costume design; Y Olga Garcia Sanchez, for lighting, in addition to the special participation of Antonio Pérez Rodríguez, in the additional choreography of the Spanish Dance of Act II, and Manu Vera in the creation and advice of magic.

The new production of the CND places the action in 1910, in the bosom of a bourgeois family, where the reality and dreams of the young protagonist coexist and face each other, showing the most beautiful images in contrast to other more disturbing or fantastic, always straddling two worlds. José Carlos Martínez wanted to draw, in his conception of The Nutcracker, “The narrow border between the real world and that of fantasy to transport the viewer to a magical universe through which to travel through the memories of their own history.”

Three double couples will alternate in the interpretation of the main roles. The days 3, 6 Y 10 (17.00 hours) Clara and the Nutcracker will be danced by Cristina House Y Alessandro Riga Y Haruhi Otani Y Angel Garcia Molinero they will give life to the Sugar Fairy and the Prince. The day 4 will defend their respective roles Giulia Paris Y Yanier Gómez Noda next to Cristina House Y Alessandro Riga. And the days 8 Y 10 (21.00 hours) the responsibility will fall on Lucie Barthélémy Y Anthony Pina Y Giada Rossi Y Yanier Gómez Noda.

The Nutcracker was premiered at the Mariinsky Theater in St. Petersburg in 1892, with original choreography by Lev Ivanov and libretto by Marius Petipa, based on Alexander Dumas' adaptation of Ernst Theodor Amadeus Hoffmann's classic tale, The Nutcracker and the Mouse King. The story begins at the Stahlbaum family Christmas party, where children and adults exchange gifts and in which little Clara receives as a present a beautiful nutcracker in the shape of a wooden soldier. From midnight, the imagination of the young protagonist unleashes a colorful adventure in which toys, animals and people will recreate their wishes and their nightmares.

The score of The Nutcracker is, possibly, one of the best known of Chaikovski, who was already a consecrated composer when the ballet premiered. It contains some of the most memorable melodies in the romantic repertoire and the Nutcracker Suite, conceived with eight ballet numbers to be performed in concert, is a regular work in the orchestral repertoire throughout the world, which shows that it is one of the best music created for dance.