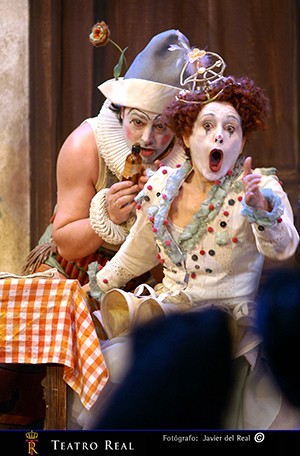 With the arrival of the Easter holidays, where many make a stop at work and smaller have a school break, video platform the Teatro Real, MyOperaPlayer continues with its doors open, for free, to provide a choice of leisure on line from which everyone can participate.

Last weekend, the Royal Theater launched the initiative Learn and play at home with Real Junior, aimed at families with children and pediatric units of hospitals, the catalog open its children and youth shows, supplemented with tutorials Y introductory video to each of the titles.

For the next few days, the Royal Theater offers a new selection of opera titles, with symphony concerts, among which the emblematic production Billy Budd, B. Britten, conceived by Deborah Warner, with musical direction by Ivor Bolton, recognized with the award for Best New Opera Production in the International Awards in 2017 and the Diapason d'Or in the category of opera, awarded by the magazine DIAPASON to DVD, co-produced con Bel Air Classiques. Billy Budd It will be available only on Saturday 11 of April, only during 12 hours, starting at 19.00 hours.

Summer 2016 We left the soprano Daniela Dessi. Fans of the Royal Theater stored in its memory the interpretation of memorable roles, like this Tosca in which Dessì is accompanied by the magnificent performances of the tenor Fabio Armiliato, in the role of Mario Cavaradossi, baritone low Ruggero Raimondi, considered one of the best Scarpiia, history with the Choir and Orchestra of the Teatro Real Headlines, directed by Mauricio me.

Under the gaze of Nuria Espert, Puccini's tragic drama takes a chilling depth. In its implementation stage wins preponderance social context in which the story is triggered, with constant crimes and torture inflicted by a political and religious power that devises, killer and humiliates under the auspices of a hypocritical and inquisitorial church.

This oppressive and gloomy atmosphere is beautifully reflected through the impressive scenery of the great Italian set designer Ezio Frigerio, reference on the world stage, by the figures of the oscarized Franca Squarciapino and the almost painterly lighting Vinicio Cheli.

both works, usually they offered in the same session, They were represented on the stage of the Real in 2007 with productions conceived by the director of the Italian scene Giancarlo Monaco, who emphasizes the verismo torn two stories with two acclaimed proposals that leave bare the tortured psychology of the characters.

Cavalleria Rusticana: A Sicilian town. Is Easter Sunday. Turiddu if prometido Santuzza, but still maintains relations with Lola secretly, his former lover. Santuzza, greatly affected, confesses to Mamma Lucia, Turiddu's mother, your child is being unfaithful with Lola. Then try to convince Turiddu to abandon Lola and return to your side, but he rejects violently. jilted, Santuzza tells it all Alfio, Lola's husband. Wounded in his honor, Alfio kills Turiddu in a knife fight.

I Pagliacci: Tonio, Peppe, Canio and his wife, Nedda, They form a company of traveling comic.

An afternoon, before the show, Tonio does see Canio that his wife is seeing Silvio, a villager who intends to run away with her overnight.

Taking advantage of the plot of the comedy depicting, sainete of jealousy and infidelity, Nedda Canio tries to reveal the name of her lover. The contemptuous attitude of this and laughter from the audience, who he thinks all part of the show, enrage both Canio stabs his wife that on stage. Silvio, who was among the spectators, approaches to help, but Canio stabs him also.

SYMPHONY No. 6 In A minor "Tragic"

The RTVE Symphony Orchestra, directed by Pablo Heras-Casado, principal guest conductor of the Teatro Real, interprets the symphony No. 6 in A minor "Tragic", of Gustav Mahler, in a concert recorded at the Auditorium Theater of San Lorenzo de El Escorial 2018.

Mahler composed this symphony between 1903 Y 1904, in his summer home in Maiernigg and premiered the 27 May 1906 s food, during the Festival of the Allgemeiner Musikverein deutsche directed by the composer himself. The play, under the name of "The Tragic", walking on its four movements deeper discussion of the composer, Inside struggle against fate, as a tragic hero defeated by the irremediable future.

paradoxically, the work sees the light in one of the most flourishing periods of personal and professional composer and behaves like an oracle, as the prediction of the hard times that waiting just around the corner.

This concert was recorded during the celebration of the 57ª Religious Music Week in Cuenca, in 2018, in the Auditorium of the city and was attended by RTVE Choir and Wind Ensemble Orchestra Symphony RTVE. At, under the direction of Javier Corcuera, It was interpreted the Misa nº 2 in E minor the Anton Bruckner.

Linked since childhood to religious musical tradition, as he begins his musical education in the parish of his hometown, Ansfelde, and complete at the Abbey of San Froilan, where he learned singing and organ, Bruckner composed numerous sacred works and masses.

Mass No. 2 in E minor It was written on behalf of the Archbishop of Linz in 1866, although it was the subject of numerous revisions in subsequent years, something very common in all the work of the Austrian composer.

Billy Budd, one of the best operas Benjamin Britten, It was presented for the first time in Madrid 31 of January of 2017 at the Royal Theater with a new production conceived by Deborah Warner, enthusiastically received by audiences and great critical acclaim, both for its scenic merit and the excellent musical performance of the soloists and the Choir and Orchestra of the Teatro Real Headlines under the direction of its principal conductor, Ivor Bolton.

Respecting the most veiled and inscrutable spaces Melville tale that underlies the opera, treated with modesty and rigor by Benjamin Britten and librettists of the opera, Deborah Warner's staging conceived without judging the characters and avoiding the most simplistic separation between good and bad. British director had the designer collaboration Canadian Michael Levine, her award-winning costume designer griega Chloe Obolensky and the magnificent illuminator Jean Kalman.

War frigate Billy Budd is a terrible metaphor for so many spaces where oppression and tyranny sow the basest instincts and irrepressible, able to emerge at any time. This feeling of instability and latent tension presides over the conception of scenery Michael Levine, an immense cage marine ropes, where scenes succeed in swaying suspended platforms, They are suggesting the permanent danger that lurks within the claustrophobic world of the British navy, when the revolutionary winds of France encouraged the oppressed sailors to mutiny. In the cracks of that terrible unknown microcosm feelings and impulses emerge.

Iolanta, de Piotr Ilich Chaikovski, Y Perséphone, Igor Stravinsky, They are two common little work on the opera stages. both titles, featuring two separate female characters, We tell stories transformative; two melodramas laden with symbolism that sail from light to darkness, and conversely, where behind every character is always the opposite.

Teodor Currentzis, to the front of the Choir and Orchestra of the Royal Theater Headlines, great connoisseur of Russian musical identity, us about its essence from the ends of both composers, both in concept and expression, but also as a whole evolves in both directions

The stage manager Peter Sellars uses for his narrative a single stage with "very intense and abstract visual images", where everything changes, as in the Russian Symbolist drama.

Its determinant, both Iolanta like in Perséphone, the presence of the chorus on stage. A mode of the classical Greek theater, their voices are being raised as narrator, interlocutor, link between the audience and the scene, guides through metaphors weaving the two stories. If Iolanta their songs lead us lies the dramatic truth, in Perséphone, reinforced by the white voices (This time the Little Singers of JORCAM) They are the gateway to the return to light and hope.

Here we hear the voice of the Russian soprano Ekaterina Scherbachenko the character Iolanta, and in Perséphone, whose protagonist does not sing, but recites, declamation of the prestigious French actress Dominique Blanc, sheltered by the voice of the tenor Paul Groves and the group of dancers from Cambodia Amrita Performing Arts (Cambodia).