Season 15 – 16 the National Center for Dissemination of Music (CNDM) 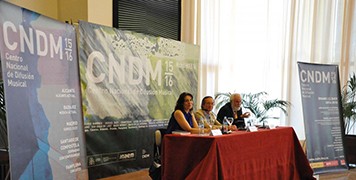 Secretary of State for Culture, José María Lassalle, along with the director general of INAEM, Montserrat Iglesias and Antonio Moral, director Center National Broadcasting Musical (CNDM), They have presented at a press conference season 15/16 This center. CNDM is a unit of the National Institute of Performing Arts and Music (INAEM), proposed, for it is his sixth season, a varied program that keeps his spirit to recover and spread our vast historical heritage and popular music of the cultured root as flamenco and jazz, incentivize the current membership and attract new audiences to classical music, or less frequent genres, through various activities organized autonomously or in collaboration with several national and international institutions.

This season 2015/16 It is composed of a total of 244 activities organized different from the 12 September 2015 al 29 June 2016. The program will take place in Madrid and in other 18 Spanish cities 8 different regions, to which must be added an American city (Bogotá) and another Portuguese (Elvas) concerts, educational sessions, music academies, interpretation courses, master classes, roundtables and lectures by outstanding performers and creators. Specific, of the 190 concerts organized in the season, 100 concerts will take place outside the Spanish capital.

Besides 10 traditional cycles Madrid (Baroque universe -Sinfónica and Camera-, Liceo de Cámara XXI, Series 20/21, Borders, Andalucía Flamenca, Jazz at the Auditorium, Counterpoint Summer, Lied and Bach Vermouth) and the 2 cycles of historical music of Leon (City Hall and FIOCLE); CNDM collaborate with 77 public and private institutions throughout the Spanish geography with the cycles of contemporary music in Alicante, Santiago de Compostela and Badajoz; Baroque cycles of Oviedo and Salamanca and stable cooperation with the cities of Burgos (Cultural Cordón), Segovia (Foundation Juan de Borbon), Cáceres (Conservatory) and international music festivals in Granada, Sevilla, Úbeda-Baeza and Zamora. CNDM this season sets new alliances with the Directorate General of Cultural Policy and Industries and the Book (Santa Teresa centenary), the Universities of Navarra, Sevilla and Valencia and the city of Ávila.

For the first time in the history of the center, our activities go beyond our borders with concerts in Bogotá and a course on the "History of a soldier" by Stravinsky at the Conservatory of Elvas (Portugal). The first institutional collaboration of international character that will carry out the CNDM and open this new season, will take place in Bogotá, in coproduction with the International Festival of Sacred Music of the Colombian capital, reference event in early music. They will 9 concerts of music from the colonial era (Sixteenth and eighteenth centuries), composed on both sides of the Atlantic by five Spanish teams and one Colombian, and two recitals of flamenco singer Archangel and violagambista Jordi Savall. It is to publicize in the American capital a part of the cycle that has already performed two seasons in ten Spanish cities, under the slogan "Sones de ida y vuelta" and now will travel to Colombia to be part of a broader international multireligious character contest, unique in Latin America, covering all ages, styles and genres, both classical music and traditional.

Figures created last year under the name of residents are embodied in this course pianist and conductor Christian Zacharias Artist in residence (with presence in our Chamber cycles Liceo, Counterpoint Summer and the International Festival of Music and Dance in Granada) and Alfredo Aracil as Resident Composer (Madrid musician released two commissions: opera without voices Always / Still, project carried out by the designer Alberto Corazón in Pamplona and Santiago de Compostela and a work for cello which will come in Alicante, and a third part 2001 that will ring in Madrid, Segovia and Alicante).

Among the commemorations, This year we will celebrate the fourth centenary of the death of Miguel de Cervantes (1547-1616) with two concerts in Madrid and Granada as an alibi to recover the musical pulse of a golden age; he 500 birth anniversary Santa Teresa de Jesus (1515-1582) the recovery of an unpublished oratory Carlo Badia, which will be offered first in our country in Avila, Salamanca and Leon Cathedral; the third anniversary of the death of the great composer alcarreño Sebastian Duron (1660-1716), who we dedicate a program with unpublished works of the Cathedral of Segovia, where his scores more than four hundred and ninetieth anniversary of the master are preserved Pierre Boulez (1925) three reference works from his chamber music catalog: The master without hammer, Pound for Quator there I drift, which they will be performed in Madrid, Santiago de Compostela and Badajoz.

In point of historical music is remarkable the retrieval and dissemination of a wide sample of our rich and extensive heritage from the Middle Ages to the late Baroque. They will recover from oblivion 80 new works (70 in the previous season), They remained unpublished until now many of them premiere in modern times by composers such as José de Nebra, Cristobal de Morales, Francisco Brusa, Juan Manuel de la Puente, Pere Rabassa, Vicente Basset, Antonio Ripa, Pascual Juan Valdivia O Juan Antonio Aragüés plus some anonymous works and other native composers and assets in Latin America as Gutierrez Fernandez Hidalgo, Luis Misón, Antonio Guerrero, Domenico Zipoli O José Cascante. These openings are distributed among 14 Spanish cities (Madrid, In addition to the own cycles of Leon, Oviedo and Salamanca; co-production or collaboration with international festivals of Granada, Sevilla, Úbeda, Baeza and Zamora and occasional concerts in Ávila, Burgos, Cáceres, Segovia and Valencia) and American Capital, Bogotá, reaching the figure of 63 different programs versus 27 in Madrid, which is a firm commitment to decentralize the musical activity CNDM.

The music of our time will, as usual, preferential attention to the organization of 44 concerts, spread over 4 Spanish cities within the Series cycles 20/21 and Liceo de Cámara XXI in Madrid (with 21 prèmieres), Current series Alicante (8 concerts and 8 premieres) The contemporary Days of Santiago de Compostela (16 concerts and 13 premieres), Current Badajoz (7 concerts and 8 premieres) and an opera without voices of world premiere in Pamplona. Total, They will be released 51 new scores, 21 of them commissioned by the CNDM. The list of composers, mostly nationals, which premiered works, generational covers a wide range of different trends and styles, with names like Alfredo Aracil, Luis de Pablo, Antón García Abril, Jesus Gonzalez, Manuel Rodeiro, Jose Rio-Pareja, Juan Cruz-Guevara, Mosquera Federico Martinez, Jacobo Durán-Loriga, Laura Vega, Joan Arnau Pàmies, Ramón Paus, Irene Galindo, Carlos Cruz de Castro, Charles Augustine, Ramon Humet, Sebastián Mariné, Illumined Pérez Frutos Y Joan Magrané, that we must unite the international teachers Lera Auerbach, Sarah Nemtsov Y Steffen Schleiermacher. The auditorium 400 (Nnchhahris) It will remain the experimental laboratory and host CNDM 12 musical events that contain, at least, a world premiere in its program. Of the 60 scheduled in that space works, 37 They belong to the twenty-first century which will allow us to deepen the current state of musical creation. Among the guest performers, the vast majority are national groups and soloists from different autonomous communities and are very committed to contemporary creation.

Successful cycle continues with the complete works for organ J.S. Bach, at its two locations: Leon Cathedral (Bach in the Cathedral) and the Symphony Hall of the National Music Auditorium (Bach Vermouth, Madrid real surprise of musical life in the previous season, who he has broken schemes and has beaten the most optimistic forecasts for such public recital and has become a social phenomenon) ten other essential names of international organistic world. the work undertaken since the beginning of CNDM to disseminate and add value to the music of popular root is also consolidates, are as Flamenco, whose cycle in Madrid saw out the locations of all concerts in the previous season, and Jazz series or Borders, so well received that dispense them younger audiences. The Liceo de Cámara XXI, who joined since last season programming CNDM, will pay more attention to the music of the great composers of classicism and romanticism, without forgetting the most representative musicians of the twentieth century. Lied Cycle, now in its twenty-second edition, It will continue to have the best voices that cultivate this special genre and have turned Madrid into one of the international reference centers.

Education takes, as in the past year, paramount importance 54 various activities spread throughout six Spanish cities and Portuguese, co-produced by 5 Spanish universities (Oviedo, Lion, Salamanca, Santiago de Compostela and Complutense de Madrid) five music conservatories in the Iberian Peninsula (Alicante, Badajoz, Madrid, Oviedo and Elvas in Portugal), two schools of secondary Community of Madrid (the fifth edition of Education Project, coordinated by the teacher Fernando Palacios) and Goethe-Institut (with the conference "Interactions XXI", dedicated to musical creation in both countries). At the University of Salamanca will take place, for the third year, an intensive program of lectures and workshops interpretation, crosscutting, in the field of ancient and baroque music "historically informed", within the Academy of Ancient Music of this prestigious University. In the Auditorium of León will be held in March 2016 the V Baroque Vocal Performance Course, which annually distributes the director and harpsichordist Eduardo López Banzo.

CNDM has a special interest in encouraging and promoting the incorporation of new audiences different informative and educational programs. Very particularly focuses on young people under 26 years for developing a wide range of possibilities, including offers important advantages in acquiring inputs or fertilizers, especially through the ticketing program Last Minute (a discount 60%) and stable agreements with numerous schools for students, actively participating in courses and cycles, coproduced together, they can attend free concerts and other activities organized by the center in different Spanish cities. Following the initiative born last year, this season will also benefit from discount Last Minute unemployed and prove that the discount remains of 20% for all students, large families and older 65 years.