The final phase of the Viñas International Tenor Competition begins, which this year celebrates its 60th anniversary 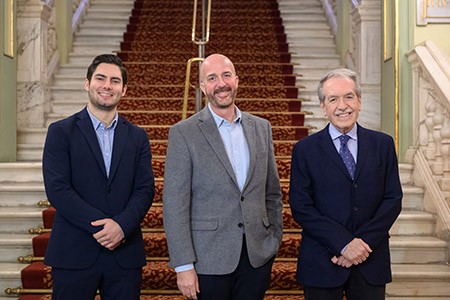 He International Tenor Viñas Competition, one of the most important competitions in the world for young lyrical talents, has presented one of its most notable editions – the one that commemorates its 60 birthday – in an act that was held at the Gran Teatre del Liceu.

Víctor Garcia de Gomar participated, artistic director of the Gran Teatre del Liceu and president of the jury, and members of the organization.

during the presentation, In addition to presenting the figures of this edition, has been projected teaser from the documentary “tenor Viñas, 60 years of musical memory of Barcelona”, that has been carried out to commemorate and review the six decades that the Contest has served the city.

60 years inspiring the most promising voices of the lyric

It was in 1963 when Jacinto Vilardell, married to the daughter of Francesc Viñas, started the Competition to keep the tenor's legacy alive, his passion for training and the international outlook of a man who projected the image of Barcelona throughout the world. The task of Viñas' granddaughter, Maria Vilardell, giving continuity to the contest during 40 years, it was essential. Six decades after its founding, the contest, with the involvement of the Gran Teatre del Liceu, It preserves its essence intact and continues to be a world reference that annually attracts hundreds of lovers of lyric and classical music..

An international character that has always been one of the hallmarks of the Contest. In the current edition, have participated since the preliminary auditions 547 singers of 59 different countries. A process that has been carried out in the most important theaters worldwide, connecting cities like Berlin, London, NY, The Angels, Milan, Paris, Beijing and Madrid.

“When we look back and see the route the contest has taken, we are filled with a sense of pride for everything we have achieved. The Contest has inspired many young people who have later become leaders in the world of poetry. This is the most important legacy we can have and the best way to perpetuate the figure of Francesc Viñas. The objective is for the Competition to continue projecting the image of Barcelona and the Gran Teatre del Liceu to the world as it has done since 1963”, explained Víctor Garcia de Gomar.

The most important dates of the contest

The Contest kicked off in November with preliminary auditions that took place in various theaters around the world.. The final phase will be officially inaugurated in the Salón de Ciento of the Barcelona City Council on Saturday 21 with the traditional proclamation by Salvador Alemany, President of the Gran Teatre del Liceu Foundation, and a recital by the renowned soprano Adriana González, who won a prize from the Contest years ago.

At the Higher Conservatory of Music of the Liceu, venue of the playoffs, he 22 Y 23 the second test will take place and the 24 and the 25 the semifinals. The Palau de la Música Catalana adheres to the 60 Contest birthday organizing the day 26 a conference by music critic Toni Colomer titled “Tenor Viñas Competition: 60 years making history”. He 27 the grand final will be played, to the Gran Teatre del Liceu and the winners will be announced. Following the final test Add Yo, soprano and winner of the competition 1985, will do a recital, accompanied on piano by Rodrigo de Vera.

The day 28, in the Liceu Foyer, the round table is organized “The light sopranos, Queens of the Belio Canto”, moderated by Víctor Garcia de Gomar (artistic director of the Liceu) and that will have the participation of June Anderson, Luciana Serra, Serena Sáenz and Sume Yo herself. As a climax and always at the Gran Teatre del Liceu, the day 29 the final concert of the winners will take place, accompanied by the theater orchestra and prizes will be awarded.

The Gran Teatre del Liceu organizes for two months on the balcony of the Foyer a commemorative exhibition of the activities parallel to the Contest, commissioned by Ignasi Borrell.

The entire contest can be followed by streaming through the Tenor Viñas website.

The International Tenor Viñas Competition has always been characterized by the demand and rigor of its jury. It is made up of the artistic directors of the theaters co-organizers with the Liceu. Lyric Legends as Renata Tebaldi, Montserrat Caballé, Victoria de los Angeles, Eva Marton, Teresa Berganza, Giulietta Simionato, Franco Corelli, Giuseppe di Stefano, Joan Sutherland, Virginia Zeani, Magda Olivero, Carlo Bergonzi, Renata Scotto or José van Dam, They have also been members of the same.

Regarding the prizes, the Contest will distribute a total of 110.000 euros that are divided as follows:

The winners, in addition to obtaining the Official Awards, access other awards such as scholarships and contracts for performances at different theaters and festivals. Some of these special awards are sponsored by great lyrical figures such as Plácido Domingo or by entities and festivals such as Friends of the Sabadell Opera, Perelada Festival, etc.

About the Viñas Tenor International Competition

The Viñas International Tenor Singing Competition is considered one of the most important competitions in the world for young lyrical talents.. Its purpose is to discover, support and publicize new voices in the field of lyric, in opera categories, oratorio y Lied.

The Competition bears the name of Francesc Viñas (1863-1933), one of the most international Spanish operatic figures of his time, who always had the concern of helping young singers at the beginning of their careers.

The contest reflects this concern and has become a loudspeaker and source of inspiration for the new generations of performers., amplifying the beginnings of the careers of its participants from various international venues until the Final that is held, year after year, in Barcelona. Participating represents much more than the possibility of winning a cash prize and personal recognition.: is to make yourself known and to put yourself under the spotlight of the professional environment that can change the life of any interpreter.