a bold “Carmen” at the Theatre Royal 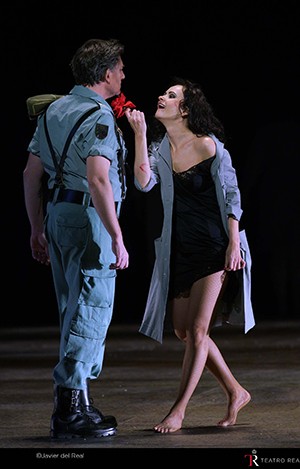 Between days 11 October 18 November Theater Royal offer 18 functions Carmen from Georges Bizet (1838-1875), with three different distributions, in the successful production directed by calixto Bieito what, since its premiere in 1999, at the Peralada Festival ─ which co-produced the opera with Opera Zuid Maastricht─, It has been presented in more than 30 theaters in Europe and America and offered in Spain at the San Lorenzo del Escorial Auditorium (2009), Gran Teatre del Liceu in Barcelona (2010 Y 2015) and the Euskalduna Palace in Bilbao (2014).

In addition to this tour of the opera houses (which will continue after the Royal Theater), the quality of the production is endorsed by the awards it has received, as the Campoamor Award, in Oviedo, in 2011, or Franco Abbiati, in Italy, in 2012.

For the spectacular roaming of production, has contributed, in addition to quality, originality and strength of Calixto Bieito's stage direction, the simple and effective scenography of Alfons Flores.

Along the 18 years, the set initially conceived for Peralada and Maastricht was adapted to the characteristics of each theater and, most unusual case, it was multiplying: several theaters have decided to rebuild the set of Carmen, as the Gran Teatro del Liceu, the Opera San Francisco (who then sold it to the Boston Opera), the English National Opera (in co-production with Oslo Opera House), he Julio Mario Santo Domingo Theater of Bogotá (whose stored decor was recently destroyed by fire), and finally, the Paris Opera, who did the scenography for the Bastille Theater last summer and who, by its proportions, is the one that best adapts to the stage of the Royal Theater.

In his dramaturgical proposal for Carmen, calixto Bieito moves the opera away from the picturesque focus and moves its plot to Ceuta over the years 70, border area conducive to the universe of smuggling and marginalization, in which the situation of the protagonists is presented with a tear, referring to the confusion caused by the premiere of the play in Paris, in 1875, when the public rejected his naturalistic drama.

Georges Bizet, deeply disappointed in the poor reception of his opera, tired and sick, would die three months later, with scarcely 36 years, without intuiting that his Carmen, precursor of Italian verism, would become one of the most performed operas in the world.

Following in the wake of Federico García Lorca, that asked the actors to show ‘the bones and blood of their characters’, Bieito demands a visceral interpretation of the singers and the choir, in which seduction, the passion, sex, the abuse, humiliation, the male chauvinism, jealousy and unreason reach the viewer with emotional violence and a frenetic pace, empowered by life to the limit in that hyperbolic underworld, not without a haunting poetry, reminiscent of Quentin Tarantino O Martin Scorsese.

The different readings and interpretations that arise from Bizet's fabulous score and its ability to provoke emotions make Carmen a work always alive and universal.

THEATERS THAT HAVE PRESENTED THE PRODUCTION OF CARMEN DIRECTED BY CALIXTO BIEITO:

family workshop Everyone to the Gayarre!: "Love is a rebellious bird".

Directed by Fernando Palacios, with the participation of Pilar Vázquez (mezzo soprano) and Elisa Rapado (piano).

Carmen: To imagine, create drawing… like a true artist.

In French (all levels) for children 4 a 8 years