A contemporánea "The Sicilian Vespers", in Verdi, The Arts in Valencia 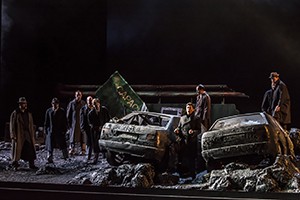 The Palau de les Arts Reina Sofia opens next 10 from December "Sicilian Vespers", from Verdi, in a contemporary assembly to reflect on the power and propaganda, as noted by the Mayor Davide Livermore in his presentation.

Roberto Abbado, holder Orchestra of Valencia, assumes the direction of the first opera subscription season 2016-2017, It presented in a production of Teatro Regio di Torino and ABAO. The staging is Davide Livermore and her Turin commemorated 150 anniversary of the unification of Italy in 2011.

As he explained by the maestro Abbado, "Sicilian Vespers", It is a musically complex and demanding score for both soloists and for the Orquestra de la Comunitat Valenciana. The play, commissioned by the Paris Opera composer Busseto, It maintains the structure of the 'grand opera' French-as reminds Abbado Verdi- to remedy musically. "To search for sense of grandeur, for example, uses a continuously variable form of the same elements ", He pointed the musical director.

Davide Livermore, as the architect of the staging, He stressed that "we are facing a complex opera, in which converge the main concerns of Verdi: Homeland, the parent-child conflicts and internal dilemma between duty and feelings ... a difficulty both scenic and musical that requires a solvent cast ".

The production, with scenery Centineo saints, wardrobe Giusi Giustino, lighting Andrea Anfossi and choreography Luisa Baldinetti, It was chosen for the publication Musical America as one of the 10 best shows 2011.

Giuseppe Verdi, as pointed Livermore, It took a historical episode of S. XIII to talk about his contemporaneity, the French invasion of Sicily as a pretext to evoke an Italy occupied in the S. XIX and address freedom, search and fight against enemy invasion.

The assembly opens the 'regista' Les Arts turinés moves the historical context to the latest most turbulent moments in Italy, the attack by the Mafia in 1992 against Judge Giovanni Falcone -maximum incentive against Cosa Nostra, his funeral in Palermo, or Berlusconisation of Italian politics and the media monopoly ‘The Knight’, to denounce the political and media corruption of modern society.

A staging, that as it advances the stage director, "Despite its links with the nearest Italian history it is perfectly universal, because it speaks of facts that are repeated in society today ".

In this sense, the Mayor has announced that the sopranos Sofía Soloviy, the days 10, 16 Y 18 Y Maribel Ortega (13 Y 21) will sing the role of Elena, as Anna Pirozzi She has canceled its presence by prescription to their stage of pregnancy.

Livermore stressed that "we have two promising voices, that under seen in trials, will continue with the tradition of this theater, where it was first heard many of the stars of today ".

Sofia Soloviy debuts at Les Arts backed by an intense career in leading European theaters, with a repertoire that ranges from Mozart to contemporary music. The Ukrainian soprano has sung this role earlier in Piacenza, Modena and Reggio Emilia in the same production, a great dramatic force and a strong bond with the contemporary world as the situation in his native Ukraine.

Gregory customer, since its mythical Otello in 2013 It has been present in all seasons of Les Arts, he recalled that the role of Arrigo assumed in 2011 his first role

Verde, besides the first collaboration with Davide Livermore, and the start of a successful stage that has established him as one of the most sought after tenors of the moment.

Juan Jesus Rodriguez returns to Les Arts, where he first sang in "Il Trovatore", under the direction of Zubin Mehta, and by 2012 He starred in "Rigoletto". Onubense singer for the score has been a discovery, especially for mounting in recent years concerning Italy "that strike a chord".

Alexander Vinogradov closes the trio of male protagonists. The Russian bass is one of the interpreters linked to Valencian arts center since its inception. debuted in 2006 with Lorin Maazel in "Don Giovanni", repeated assistance under the direction of Zubin Mehta in "Carmen" and "Salome" and by 2015 he returned to sing along to Placido Domingo in "Macbeth".

In addition to the premiere on Saturday 10 from December, the remaining functions of this opera will take place on 13, 16, 18 Y 21 this month.