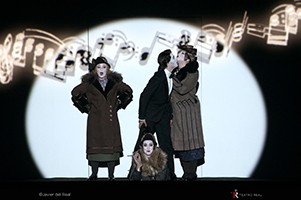 Between days 16 Y 30 January the Teatro Real will offer twelve functions of The magic Flute, from Wolfgang Amadeus Mozart (1756-1791), in a production from the Komische Oper in Berlin, that since its premiere in 2012 It has been performed in various theaters and festivals almost continuously: Los Angeles and Minnesota Operas, Düsseldorf and Duisburg operas, Edinburgh and Sankt Poelten festivals and a tour of the Chinese cities of Canton and Xiamen. After Madrid the production will continue its journey through Paris and Barcelona.

The success of this scenic and dramaturgical proposal lies in its enormous facility to communicate with the public, your mood, his waste of creativity and complicit winks at the viewer through a visual universe as well known as the silent movies of the years 20, in which they parade from a handsome guy Rudolph Valentino (Tamino) to a Pamina that reminds Louise Brooks in Lulu, or the Nosferatu evoked by the figure of the evil Monostatos. The unmistakable body language of Buster Keaton (Papageno) emerges in the gestures of many of the characters in their dialogue with the screen, transformed into a virtual set made with the most sophisticated techniques of animation cinema by Suzanne Andrade, Paul Barritt and his company 1927, created by both in London in 2005.

The absence of a traditional decoration also favors the mobility of production, who lives off the acting talent of the interpreters, whose movements must have the freshness of the gag and a clockwork precision in their coordination with the projection of the drawings on the screen.

In this evocation of the silent film, the spoken dialogues of The Magic Flute appear projected on cartouches and accompanied by the pianoforte by Luke Green, who will perform excerpts from Mozart's Fantasy in C minor.

In the pit will be the Musical Director of the Royal Theater, Ivor Bolton, holder from 2004 of the Orchestra of Salzburg Mozarteum, where he has spent more than 10 years to the interpretation of the classical repertoire in the birthplace of composer. Bolton will once again conduct the Teatro Real's titular Choir and Orchestra in one of the most popular operatic titles, which will be presented for the third time at the reopened Teatro Real after having done it in January 2001 (Frans Brüggen / Marco Arturo Marelli) and July 2005 (Marc Minkowski / La Fura dels Baus).

Coinciding with the performances of The Magic Flute, the Royal Theater has organized a series of parallel activities related to Mozart's opera and the silent films of the years 20 which he inspired the drama and stage production proposal that will be seen on its stage.

Coinciding with the representation in the Royal Theater of The magic Flute with a set and staging taken from Buster Keaton and the pioneers of American comedy, the Cine Estudio carries out an extensive cycle dedicated to slapstick. Buster Keaton has a place in it, Charles Chaplin, Stan Laurel, Oliver Hardy y Fatty Arbuckle, but also many comedians (and comics) today forgotten that we rescue for our spectators.
7 a 31 from January.

Television adaptation of Mozart's opera, from the personal vision of the Swedish director.
21 Y 31 of January of 2016

From Mozart and Wagner

Parallel activity to The Magic Flute and The Prohibition of Love

Wolfgang Amadeus Mozart: Quintet for clarinet and string in A major, K 581

The magic Flute
Appointment with the Queen of the Night and Papageno, in which songs will be performed,

With the participation of the pianist Federico Lechner