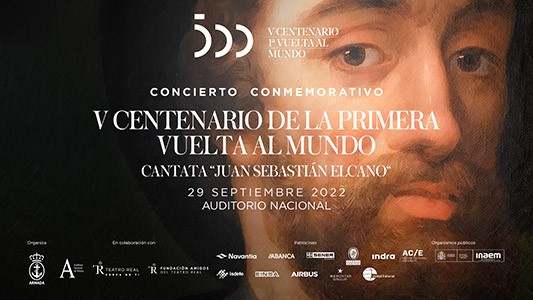 The next 29 September will take place at the National Auditorium the concert V Centenario de la Primera Vuelta al Mundo, which will include the participation of Orchestra and Chorus of the Royal Theater Headlines, under the direction of Miguel Pérez-Sierra, for interpreting Cantata John Sebastian Elcano, from Gabriel Loidi.

Organized by the Armada, in collaboration with the Teatro Real and the Foundation Friends of the Royal Theater, the concert is part of the commemorative acts of the V Centenary of the Expedition of Fernando de Magallanes and Juan Sebastián Elcano that completed the First Around the World.

The play, composed for choir, orchestra and narrator, with texts and declamation of Martin Llade, wants to pay tribute to the first circumnavigation of the earth, started by Ferdinand Magellan in 1519 and concluded by Juan Sebastián Elcano in September 1522. A feat that decisively changed the course of history.

In the words of the composer, the cantata not only wants to recognize the great figure of Elcano, focuses “on the expedition as a whole, those two hundred and forty-five men who left Sanlúcar towards the abyss of uncertainty, knowing where they wanted to go, but without knowing where” and pursues “the ambition of telling and making what is told felt in one’s own skin, to make the listener live the farewell, the wait, The distrust, treachery, the fear, hunger, death, the chasing, the return, the victory".

A) Yes, the choir expresses the emotions of the men who lived through this history and the orchestra will be the voice of the sea, but also of the feelings that transit their souls.

The public will travel this journey with the sailor Andrés de Urdaneta, disciple and friend of Elcano, with whom he participated in his second trip and whose arms welcomed his last breath, to transfer the facts in a simple way, although always full of emotion. Martin Llade, author of the texts, will play the character of this young sailor who, after an intense life at sea, and in the overseas territories, he would enter the Augustinian monastery in Mexico City, what did not manage to separate him from the ships.

Released in 2018, the Cantata John Sebastian Elcano can be heard on Thursday 29 of September, in the Symphony Hall of the National Auditorium, to 19.30 hours, and will be broadcast, live, by National Radio of Spain, Classical Radio.

All soloists are members of the choir

ORCHESTRA AND CHOIR OF THE ROYAL THEATER