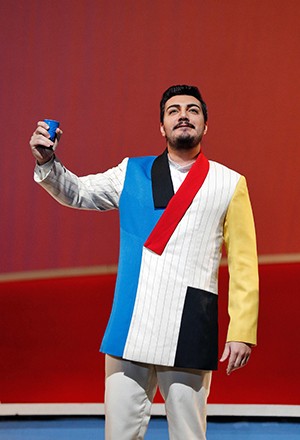 The young Italian tenor, which last year debuted in the Teatro Real in Madrid in the role of Rodolfo verdiano (Luisa Miller), Madrid returns to the Coliseum after his recent success the protagonist role The swallow Puccini, en la German Opera Berlin, to give life to another character Pucciniano, sublieutenant Benjamín Franklin Pinkerton in Madama Butterfly.

Vincenzo Costanzo, It is one of the younger tenors and most international of Italian opera scene. At twenty-five, the talented Neapolitan singer, degree in Computer Engineering, He has ceased to be a young talent who has conquered with its attractive plot important awards lyrical voice as Verdi Voices Competition Busseto or known as Oscar de la Opera (New Generation Award Tenor), and he has stepped on some of the most famous opera stages around the world: La Fenice in Venice, Teatro San Carlo in Naples, Opera Amsterdam, Teatro Massimo of Palermo, Opera San Francisco, German opera Berlín…

On aplaudido rol de Puccini B. F Pinkerton in the opera of San Francisco, He marked his successful debut in the US in a role that already has become his hallmark. Since its debut, at twenty years as B.F.Pinkerton in the Maggio Musicale Fiorentino, Puccini has sung the role many times at La Fenice in Venice, and among other famous Italian theaters like the Teatro di San Carlo di Napoli, Opera de Florence, Teatro Giuseppe Verdi of Salerno, HNK Zagreb; after passing through the Teatro Real in Madrid, its immediate commitments as Pinkerton, The Phoenix include Venezia or Hamburg Staatsoper.

His return to Spain, It is supported by the magnificent artistic results it has garnered in the last season. At the Teatro Real Madrid will sing functions 1, 4 Y 20 July in the acclaimed production Madama Butterfly with scenic firm Mario Gas and musical direction Marco Armiliato.