Vivaldi in the Baroque Universe CNDM 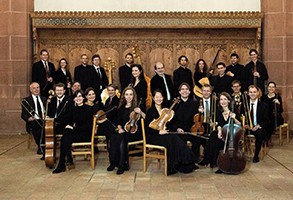 In the last decades, the public image of Antonio Vivaldi has completely changed: Copyright almost exclusively a brilliant instrumental music has become also considered an extraordinary composer of operas, genre that is dedicated to fruition. Andrea Marcon will offer one of his best-known maturity titles, The trust nymph, work that served in 1732 for the inauguration of Verona Philharmonic Theater. María Espada, Carlos Mena, Karina Gauvin, Romina Basso O Topi Hardwood these are compelling reasons to think that the proposal will be a new success for the Vivaldi opera in Madrid.

The Zither Barockorchester was founded in 1999 at the initiative of Dr. Peter Reidemeister, then director of the Schola Cantorum Basiliensis, and quickly came to be recognized internationally as one of the leading ensembles in historical interpretive practice. The name of La Cetra has been taken from the title of the collection of 12 violin concertos op 9 by Antonio Vivaldi, first published in Amsterdam in 1727. "La Cetra" refers to the ancient lyre or zither.

Most of the musicians are graduates of the Schola Cantorum Basiliensis, the Swiss elite training center for ancient music. The group collaborates with the research department of the Schola Cantorum that allows the process of musical creation to be accompanied by the latest advances in musicological research. The discovery of works by composers such as Brescianello, Venturini O Paisiello have enriched the repertoire of the orchestra, which ranges from the first works of Monteverdi from the 17th century to the symphonies of classicism and early romanticism.

Since 2009, La Cetra's artistic director is Andrea Marcon, internationally known as one of the most prominent conductors of the baroque and early classical repertoire. He has brought new impulses and a new approach to the rich and, often rediscovered, repertoire of the time. Recently, for example, La Concordi de ’pianeti by Antonio Caldara was performed for the first time in almost 300 years and was recorded by the Deutsche Grammophon label.