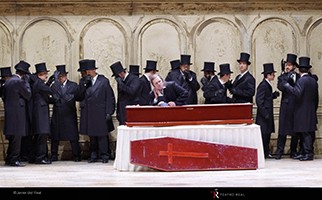 This monumental and unclassifiable "mystic-dramatic oratorio", conceived to be performed only in the revolutionary Teatro de Bayreuth, without applause, to avoid disturbing the religious atmosphere of the ritual music-theater, He has promoted, since its premiere in 1882, diverse and contradictory interpretations, heated debates and endless works inspired directly or indirectly in the existential derived from the mysterious Wagnerian hero.

The opera, inspired by the medieval epic poem Parzival, from Wolfram von Eschenbach, condenses the reflections of a lifetime of tireless search for knowledge, with multiple influences, from christianity to buddhism, through the philosophy of Arthur Schopenhauer (1788-1860), so admired by the composer.

Wagner returns once again to the recurring theme of redemption through a symbolic pilgrimage, philosophical and metaphysical more complex than in his previous works, with a clear testamentary purpose. The plot, with sketches that were sedimented throughout more than 20 years, part of the search, by the monk-knights of the Grail, of a pure and kind hero who can heal the wound of their leader Amfortas. Parsifal, unaware of its origin and destiny, snatch the holy spear from the treacherous Klingsor, resist the wild sensuality of Kundry and embark on a winding and difficult path of purification of the soul to reach salvation.
Claus Guth transfers the despondency and orphanhood of the Grail knights in their Monsalvat castle to a sanatorium where the soldiers destroyed by war end up, in a Europe devastated, broken and aimless.

The German stage director strips the work of its religious meanings to focus on the specific drama of the characters and their urgent need to find hope in a Messiah bearer of bliss.

The production, released in Liceu Barcelona on February 2011, will have a single distribution, with Christian Elsner in the title role, along with other veteran Wagnerian singers already known to the public at the Real: Anja Matches (Kundry), Detlef Roth (Amfortas), baritones Franz-Josef Selig (Gurnemanz) Y Evgeny Nikitin (Klingsor), and bass-baritone to Jerkunica (Titurel).

The prestigious Russian conductor Semyon Bychkov will redirect the Headlines Choir and Orchestra of the Teatro Real after the triumph obtained with his interpretations of Elektra, at the season opener 2011-2012. But nevertheless, the days 12 Y 15 of April will hand over the baton to Paul Weigold, debuting at Real.

Conference
In collaboration with the Wagnerian Association of Madrid
From Parsifal to Moses and Aaron, a moving itinerary
By Arnoldo Liberman
With the participation of Dagmar Lieblová, holocaust survivor
1 of April, Friday, to 19.30 h
Teatro Real. Sala Gayarre

Everyone to the Gayarre!
Sunday introductory music workshops for the whole family
Direction and presentation by Fernando Palacios with the collaboration of musicians and singers
the magic mountain
Monsalvat, the mountain that hides many secrets
24 of April, Sunday, to 12.00 and to the 17.00 h
Teatro Real. Sala Gayarre